Major of Europeans See Daesh, Not Russia, as Top Threat

Despite NATO's consistent efforts to present Russia as the key threat to its European neighbors, the majority of Europeans singled out Daesh along with global climate change and global economic instability as the top challenges their countries face, a recent survey conducted by the Washington-based Pew Research Center shows.

The think tank talked to people in France, Germany, Greece, Hungary, Italy, the Netherlands, Poland, Spain, Sweden and the UK.

"Looking across the 10 European countries surveyed, a median of 76 percent say that [Daesh] is a major threat to their country, with only two-in-ten saying that [the terrorist group] is either a minor threat (17 percent) or no threat at all (3 percent)," the Pew Research Center detailed.

Europeans have reason to be worried. France and Belgium have been rocked by major terrorist attacks in recent months, with other countries also affected. These include the January 2015 Charlie Hebdo shooting and the Hypercacher kosher supermarket siege in and around the French capital, the November 2015 night of terror in Paris and the March 2016 bombing at the Brussels airport and subway. 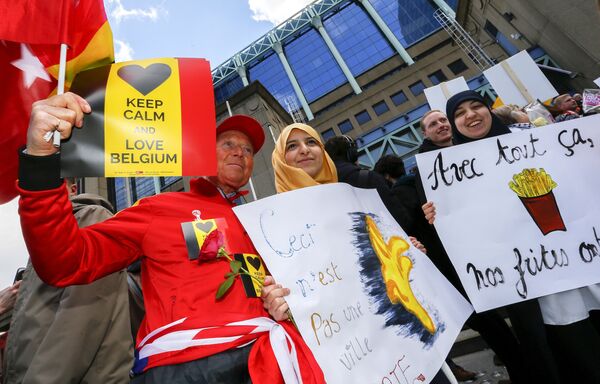 People take part in a rally called "The march against the fear, Tous Ensemble, Samen Een, All Together" in memory of the victims of bomb attacks in Brussels metro and Brussels international airport of Zaventem in Brussels, Belgium, April 17, 2016
© REUTERS / Yves Herman

Wind of Change Needed: Most Europeans Unhappy With EU Policy Toward Russia
Unsurprisingly, ninety-three percent of respondent in Spain and 91 percent of the French, who took part in the polling, placed Daesh at the top of their list of threats. A total of nine countries named the terrorist group as the key threat.

Greece is the only exception to this rule. Daesh is a major concern for 73 percent of Greek respondents, but their vote (95 percent) went towards global economic instability.

Cyberattacks launched from other countries and a massive wave of refugees from war-torn Iraq and Syria were also top concerns for many Europeans.

​"Other threats such as tensions with Russia, China's emergence as a world power and US power and influence are perceived as less dire, though most people still perceive them as at least minor threats," the pollsters noted.

Thirty-four percent of respondents named the cold spell between the West and Russia as a major threat. Almost half of respondent (48 percent) view the tensions as a minor threat, with 16 percent saying that they pose no threat at all. 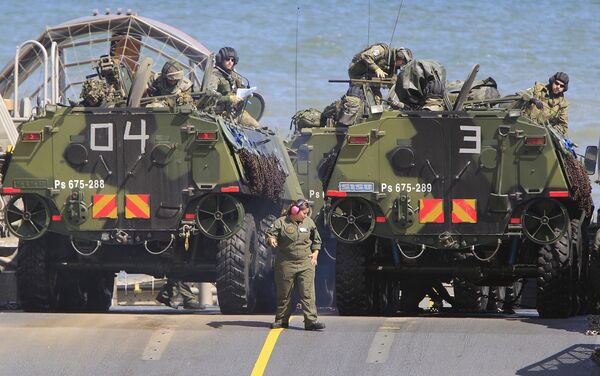 Soldiers park their amphibious vehicles on a ship as they participate in a massive amphibious landing during NATO sea exercises BALTOPS 2015 that are to reassure the Baltic Sea region allies in the face of a resurgent Russia, in Ustka, Poland, Wednesday, June 17, 2015
© AP Photo / Czarek Sokolowski

There is a noticeable exception in this regard, Poland. An overwhelming majority of Poles (71 percent) named tensions with Russia as a major threat to their country, a far greater percentage than any of the other nations surveyed.

Chomsky: 'One of Clinton's Many Crimes Was to Expand NATO to the East'
These figures are not surprising. Warsaw has long advocated for NATO's greater military presence in Eastern Europe and the Baltics, citing Russia's supposedly "aggressive" behavior as the reason. Poland has been one of the key driving forces behind the bloc's upcoming unprecedented military buildup on its eastern flank.

Moscow has always maintained that it poses no threat to any of its neighbors or beyond.

Interestingly, Poland and the Netherlands are the only two countries that favor increasing defense spending. Fifty-two percent of Poles and 49 percent of the Dutch support this step.