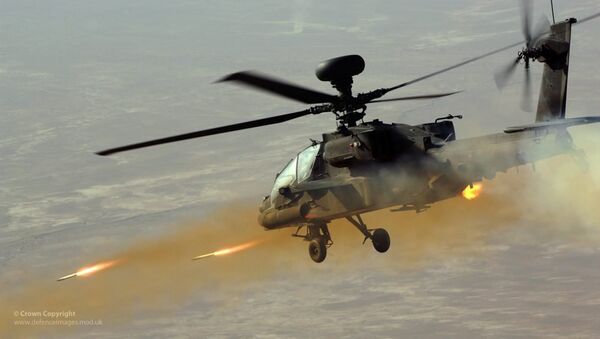 © Flickr / Gonzalo Alonso
Subscribe
International
India
Africa
As the US continues to fight Daesh, also known as IS/Islamic State, in Iraq, Apache helicopters are being deployed for the first time.

In April, the Pentagon sent a fleet of Apache helicopters to Iraq. Use of the aircraft was delayed partly because Iraqi officials have been wary of the US attack helicopter, given their heavy use during the American occupation.

But the aircraft saw action this week.

On Monday, US Defense Secretary Ashton Carter told reporters that at least one Apache had been used to attack a Daesh target, as part of an effort to retake the city of Mosul.

The target was reportedly a ground vehicle.

According to one US official speaking on condition of anonymity, two Apaches were used in the mission, while only one carried out the strike.

"The use of Apache helicopters in the current Iraq war is extremely controversial among Iraqis, because of their heavy use in the US occupation, and the continued perception among many locals that a growing US presence is a sign of another occupation in the making," Jason Ditz writes for AntiWar.com.

According to US Defense Department spokesman Christopher Sherwood, Baghdad approved of the operation.

"The government of Iraq approved the use of Apaches in support of ISF [Iraqi Security Forces] operations," Sherwood said, according to Raw Story.

"The strike was vetted and approved through the same process the [US-led] coalition used for all strikes."

Coalition forces have encircled the city of Mosul in northern Iraq in an effort to retake the Daesh stronghold. Earlier this month, Kurdish Peshmerga forces liberated a large swath of territory to the east of the city.