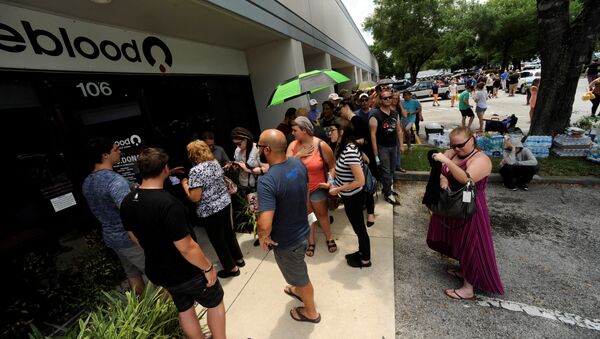 What is Known So Far About Deadly Nightclub Shooting in Orlando
The law is a holdover from the time of the AIDS epidemic. At its height, men who have sex with men (MSM) were banned from donating blood in 1983 as gay men were widely perceived to be one of the greatest risk groups and no screening tests existed for showing contaminated blood.

Following the massacre at a gay nightclub in Orlando, Florida, which left 50 people dead and over 53 injured, there has been an urgent need for blood donations.

People took to social media to express anger over the federal government's ban on blood donations from gay and bisexual men.

They called the ban a “cruel irony” with some saying that it is “absurd” and “discriminatory.”

The FDA should overturn this legislation based solely on homophobic rhetoric. Gay men should be allowed to donate blood. #Orlando

Listen up @US_FDA there is no such thing as gay blood, black, white, Muslim, Jewish, straight blood-- it all bleeds red and can save live

We must overturn the morally bankrupt/dangerous ban on gay people giving blood. Absurd someone can't even donate blood to their own husband?

Yet gay people can't give blood to help their own. Because they're gay.

​On Monday, rumors circulated online that OneBlood, a nonprofit blood donation clinic in Orlando, had lifted the ban.

However, according to OneBlood, this isn’t true.

All FDA guidelines remain in effect for blood donation. There are false reports circulating that FDA rules were being lifted. Not true.

Thank you so much for the incredible outpouring of support! Right now our donor centers and Big Red Bus locations are at full capacity.

​Last year, the FDA softened its rules, permitting gay men who have abstained from gay sex for 12 months to give blood. Earlier, it had been a lifetime ban.

In practice, this ban is expected to keep away most sexually-active gay men and in fact OneBlood and other Orlando clinics said they still hadn’t adopted protocols to conform with the new FDA rule.

The one-year deferral period puts the US on a par with the UK, which adopted a similar protocol five years ago. In turn, Germany still has a ban on MSM blood donors, whereas, Canada requires them to wait five years from their last time of intercourse before donating blood.

There is no deferral period in countries, such as Russia, Spain, Italy and much of South America.