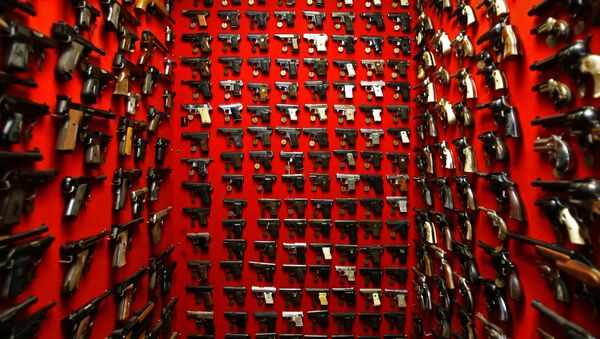 Orlando Shooting: 4 Scapegoats Republicans Use to Avoid Gun Control Debate
Sunday’s shooting left 49 people dead and 53 more injured, making it the deadliest massacre in US history since the Wounded Knee killings. The killer was armed with, among other weapons, an AR-15, a military-grade assault rifle similar to those used in other large mass shootings including Sandy Hook and San Bernardino.

The gunman, Omar Mateen, who pledged his loyalty to ISIL (also known as Daesh or Islamic State) prior to and during the attack, had legally obtained the weapons — despite the fact that he had been previously questioned and investigated by the Federal Bureau of Investigations (FBI).

Naturally, the ease of killing so many so quickly with a weapon made for military use prompted another event in an ongoing backlash against the National Rifle Association and renewed calls for semiautomatic rifles to be banned from public ownership.

As the nation mourned for Orlando, calling for new laws to curb these far-too-frequent shootings, shares of firearm-manufacturer stocks rose, with Smith & Wesson Holding Corp stocks up 8.8% to $23.30 and Sturm, Ruger & Co Inc jumping 4.5% to $60.

"Here's how it works,” Lee Fang wrote for the Intercept following the San Bernardino shooting, “Following a mass shooting, there is talk of gun control, which the National Rifle Association and other gun advocates attack as an assault on the Second Amendment. Notably, gun and ammunition manufacturers often donate, either directly or as a portion of each sale, to the NRA. The fear of losing gun rights leads to panic buying, which brings greater profits to gun retailers, gun companies and their investors.”

Stocks in weapons manufacturers also jumped in January, after US President Barack Obama promised executive action for gun control, including an expansion of background checks.

The record was broken in 2015, the same day that a gunman killed three people and wounded nine others at a Planned Parenthood office in Colorado, as 185,345 background checks were processed – roughly two per second, in 24 hours.

Ed Stack, chief executive of Dick's Sporting Goods, a high-volume gun and ammunition retailer in the US, said in September 2014 at the Goldman Sachs Global Retailing Conference: "The gun business was very much accelerated based on what happened after the election and then the tragedy that happened at Sandy Hook."

In 2015 alone in the United States there were 372 mass shootings, defined as an event in which four or more people are killed or wounded within the same general location and time frame, according to the Mass Shooting Tracker. These acts of violence left 475 people dead and another 1,870 wounded.