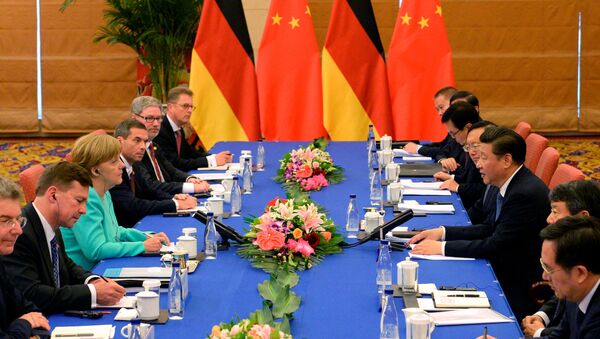 © REUTERS / Wang Zhao/Pool
Subscribe
Germany and China signed on Monday a batch of deals on cooperation, mostly in third-world countries, during intergovernmental consultations in Beijing, a German government spokesman said.

"China is one of our most important partners. Agreements worth billions [of euros] were signed today in Beijing," Steffen Seibert announced in his Twitter feed.

Speaking at a joint press conference with Chinese Prime Minister Li Keqiang, Merkel said they had agreed to work together on training miners and experts responsible for disaster risk reduction in Afghanistan, among other projects.

The Chinese prime minister admitted that the country had trade differences with the European Union, but stressed Beijing did not want a trade war with the bloc within the WTO.

China entered the WTO in 2001 as a non-market economy and is to switch to an upgraded status in 2017, which will make exports easier.

"China has already fulfilled its obligations. We have complied with the commitments we made on entering the WTO," Li said. "Now is the time for you to say yes to your commitments. We do not want a trade war."

According to Seibert, Germany is China’s key EU trade partner, with some 5,000 German businesses having offices in China. The Asian nation is the second most important export market for German machine industry and one of Germany’s major investment targets, with a total of 60 billion euros.