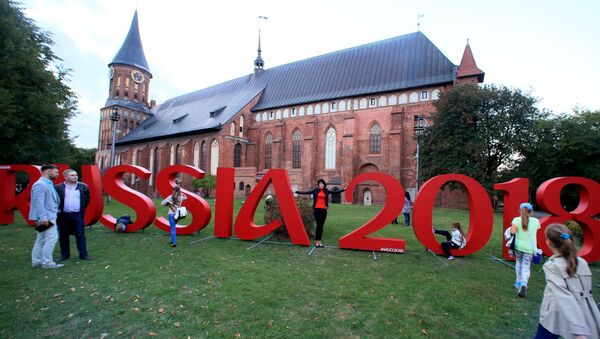 © Sputnik / Igor Zarembo
/
Go to the photo bank
Subscribe
Russian authorities will take into account all the lessons learnt from UEFA’s Euro 2016 in terms of security while preparing for the 2018 FIFA World Cup taking into, a spokeswoman for FIFA said Sunday.

Mutko Agrees With UEFA Investigation Into Russia Over Football Fan Clashes
MOSCOW (Sputnik) — Russian authorities will pay attention to security of the 2018 FIFA World Cup taking into consideration all the lessons learnt from UEFA’s Euro 2016, a spokeswoman for FIFA said Sunday.

France's Marseille, which is one of Euro 2016 host cities, has been hit by disorders organized by football fans or several days in a row. The scuffles peaked on Saturday, as Russian and English fans clashed ahead of the match between their national teams and after it. After the incident UEFA launched disciplinary proceedings against the Football Union of Russia, but not against the English side.

"For the 2018 FIFA World Cup, detailed security planning began by the local authorities from the moment the host country was chosen. The relevant Russian authorities are putting in place a comprehensive security concept for next year’s FIFA Confederations Cup and the 2018 FIFA World Cup, of course incorporating any lessons learnt from other events such as EURO 2016 and Rio 2016 in order to try to avoid any repetition of such incidents," the spokeswoman told R-Sport.

She added that the policing and security infrastructure of major sports events, such as UEFA’s Euro and the FIFA World Cup were very complex in nature.