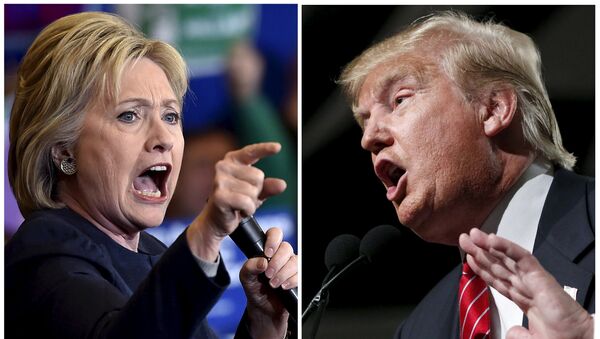 © REUTERS / David Becker/Nancy Wiechec/Files
Subscribe
International
India
Africa
Investors are massively reallocating capital into safe haven assets, putting economies and financial markets in danger of disinvestment in places due to a multitude of risks, the most prominent of which being whether the US economy would undergo a structural readjustment anytime soon.

World
Less Than Shocking: Trump Makes Contradictory Statements on Climate Change
Kristian Rouz – The underperforming growth in advanced economies and emerging markets alike rendered investors increasingly pessimistic in their return-on-investment (ROI) expectations across the globe. Subsequently, capital flows into non-financial sectors and most financial assets are drying out, being diverted to lower-yielding, yet safer assets such and the Japanese yen, the Swiss franc, US Treasuries and Deutsche Bunds.

British gilt securities would have been experiencing similar add-value, dip-yield dynamics if not for the Brexit risks, investors say, yet, as soon as this situation clears out, the UK governmental debts securities are bound to follow similar dynamics. The tendency is likely to persist until at least a handful of similar-type economies demonstrate solid growth potential, quite an unlikely development in the near-to-mid term amid mainland China’s ongoing slowdown and the intensifying and highly volatile US presidential race due to the “Trump factor.”

Voicing global investors’ anxiety over a handful of international risks to financial stability, Jeffrey Gundlach, head of Los Angeles-based DoubleLine Capital, said high-risk assets are facing a rising downward pressure because of the frustrating pace of economic growth in the world’s most prominent markets, whilst mainland China’s outlook is uncertain, and the volatility stemming from the US presidential race are both weighing on investor confidence.

"Falling global GDP expectations, fueled by China having trouble holding it together, are affecting financial markets," Gundlach said as reported by Reuters. "And then, there's the unfolding Trump 'victory scare narrative.'"

Donald Trump, billionaire investor and 2016 presidential candidate from the GOP, adds unpredictability to the US economic outlook. While Hillary Clinton is a “status-quo” candidate, backed by the leading  international banks, such as Deutsche Bank, Goldman Sachs and Citigroup, and standing for the continued flogging of the dead horse of debt-fueled growth model, Trump is a different story. Coming from the non-financial sector background, and owning and operating massive assets in the construction and real estate sector, Trump has recently advocated massive infrastructural development as one of the pillars of his economic strategy. Another key point of his proposed economic policies is an intensified “re-shoring” of US manufacturing that recently has demonstrated dismally negative dynamics, hindering US growth prospects.

The US infrastructure is “terrible”, and, particularly, airports are “a disgrace,” Trump noted recently, having added that his intention is to “start the greatest long-term building project in American history.”

His remarks on the current state of the US manufacturing were also harsh. "I am fighting hard to bring jobs back to the United States. Many companies – like Ford, General Motors, Nabisco, Carrier – are moving production to Mexico," Trump said. This, in his opinion, is "bad for all Americans," he added.

A potential hit to the financial multinational’s solid presence in the US, Trump is a huge risk factor to the valuation of the currently hot assets. Assuming Trump wins the upcoming election, his demand-side economics, protectionist agenda, and 99-percenter-friendly rhetoric are a significant risk to the stock markets and Wall Street in general. Generally, a massive infrastructure development and re-industrialization of America, advocated by Trump are most likely to drive commodity prices in the near-term, resulting in quicker growth for the US afterward.

Therefore, Trump’s electoral victory would mean a huge win for emerging markets. As for the US debt as one of the main sources of financing for such a massive remodeling process, the yield is likely to rise under a Clinton administration, as the pace of borrowing, accelerating under either Trump of Hillary, would be quicker should the current growth model persist.

Based on such forecasts, investors are piling into Treasuries, mostly to sell after the election. On Friday, 10-year US debt securities rose in value, with yield dropping to 1.633%, its February low.

"If the 10-year Treasury note's yield breaks below the three-year resistance, then it is a big game changer," Gundlach said.

Indecisive messaging for the Federal Reserve is hardly encouraging global investment as well, while the heightened Brexit risks have pushed the European banking sector into the red. Meanwhile, US stocks are not a place to be either, at least until after the election, at which point there would presumably be more clarity of further developments in the broader economy.

“The S&P 500 index has gone nowhere in the past 12 months to 18 months,” Gundlach said. In his opinion, US stocks is “dead money”, with all gains seen in the past several years having been driven by the Fed money injections and corporate buybacks.

Unless major structural shifts happen in the US economy, the capital flight for safety is bound to continue in the mid-term.