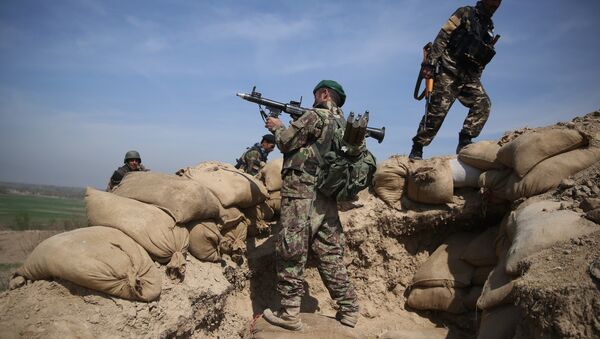 The decision to expand the role of US military forces in Afghanistan reflects a growing fear that the US-trained and equipped national force will otherwise collapse, former CIA counterterrorism officer Philip Giraldi told Sputnik.

WASHINGTON (Sputnik) – Under the new policy, confirmed by Defense Secretary Ashton Carter on Friday, US commander in Afghanistan General John Nicholson will be able to decide when American troops may accompany regular Afghan troops into combat.

"The powers that be [in the Obama administration] have realized that either the United States become more actively engaged in Afghanistan or the entire 14-year enterprise will collapse due to Afghan Army and police inability to confront the challenge posed by the Taliban."

Giraldi said the policy change was necessitated by the poor condition of the regular Afghan military force.

"The Afghan army is bedeviled by corruption and poor morale as well as no sense that the fighting is leading to any kind of political settlement."

Giraldi also predicted that the move was no more than a holding operation so that US President Barack Obama would not face a total collapse of the Afghan Army before he leaves office in January 2017 and to help his heir, former secretary of state Hillary Clinton win the 2016 election.

"Obama for his part is hoping to keep the leaking ship afloat just long enough to see Hillary in the White House."

Giraldi advised that the US government seek a genuine compromise negotiated settlement with the Taliban since it had no realistic hope of eradicating them.

"Only a political settlement that includes the Taliban has any chance of success."

Speaking at a Defense One technology summit in Washington earlier on Friday, Defense Secretary Carter defended the new policy as an effective use of the limited US forces still operating in Afghanistan.

The move gives the US military greater ability to accompany and enable Afghan forces battling the Taliban, in a move to assist them more proactively on the battlefield with a greater use of US air power, particularly close air support.

Philip Giraldi, a former CIA Case Officer and Army Intelligence Officer who spent twenty years overseas in Europe and the Middle East working terrorism cases. At present, he serves as Executive Director of the Council for the National Interest.