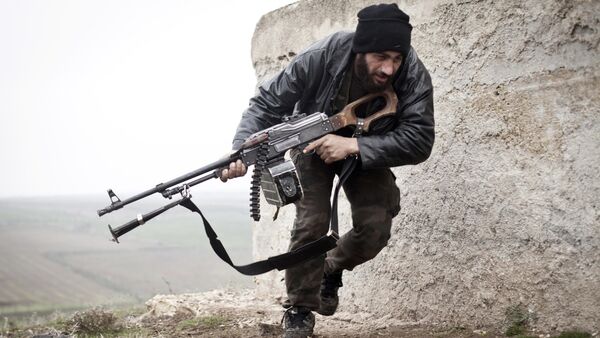 The Pentagon and the CIA are involved in an embarrassing infighting over Syria: incredible as it may seem, the two US government's services are supporting different rebel groups, while their goals on the ground are somehow not overlapping.

While the Syrian Arab Army assisted by Russia is gaining ground in Syria, eliminating Daesh and al-Qaeda terrorists, Washington is yet to decide whom exactly it supports in the Middle Eastern region.

And here is the rub, since Washington has at least two versions of what it should do in Syria.

"Two Department of Defense officials told The Daily Beast that they are not eager to support the rebels in the city of Aleppo because they're seen as being affiliated with al-Qaeda in Syria, or Jabhat al-Nusra [al-Nusra Front]. The CIA, which supports those rebel groups, rejects that claim, saying alliances of convenience in the face of a mounting Russian-led offensive have created marriages of battlefield necessity, not ideology," Nancy A. Youssef of the Daily Beast wrote Thursday, adding that the Pentagon and the intelligence community have busied themselves in a catfight over Syria.

By Retaking Raqqa Syrian Army May Upset 'Federalization' Plan
Youssef cited an unnamed Pentagon official who told her that the American military effort is aimed at defeating Daesh in the first place, while the rebels in Aleppo are fighting against Syrian President Bashar al-Assad and his Syrian Arab Army. In contrast, the intelligence community is insisting that the defeat of Bashar al-Assad is a necessary precondition to eradicate Daesh, the journalist noted.

Alas, there is a fatal flaw in the CIA's logic: by defeating Assad, the US-backed forces would de facto open the gates of Damascus to Daesh and al-Qaeda.

In his February interview on The John Batchelor, Show Professor Stephen F. Cohen referred to former British chief of the defense staff General Sir David Richards and former chairman of the US Joint Chiefs of Staff Gen. Martin Dempsey, who claimed that Bashar al-Assad's Syrian Arab Army (the SAA) is the only credible force that can defeat Daesh on the ground.

"Therefore Obama's plan to get rid of Assad which would risk the stability of the Syrian state and thus the Syrian Army, as happened when they got rid of Gaddafi in Libya, was a mistaken policy," Stephen F. Cohen, professor emeritus of Russian studies at New York University and Princeton University, stressed.

Race to Raqqa: Coordination Between Syrian Army and Rebels 'Quite Real'
However, the Pentagon and the CIA each continue to pursue their own goal on the ground in Syria, from time to time finding themselves in embarrassing situations.

In late March 2016 Los Angeles Times reported that Syrian militants "armed by different parts of the US war machine" began to fight each other in the Aleppo region.

The media outlet narrated that in mid-February the CIA-backed Fursan al-Haq, or Knights of Righteousness, was expelled by Pentagon-backed Syrian Democratic Forces (SDF) from the town of Marea, located about 20 miles north of Aleppo.

To make the matters even more complicated, it is well documented that since the very beginning the Obama administration was fully aware that it was supporting Islamists allied with al-Qaeda and even with Daesh.

A 2012 de-classified Defense Intelligence Agency (DIA) document indicated that the White House was informed that "the Salafists, the Muslim Brotherhood and AQI (al-Qaeda in Iraq)" were "the major forces driving the insurgency in Syria."

​Later, in his 2015 interview with Al Jazeera, Michael T. Flynn, a retired director of the Defense Intelligence Agency, noted that it was Washington's "willful" decision to team up with Islamists.

Remarkably, in late February 2015 a Twitter user named GungHo2 asked Robert Ford, a former US Ambassador to Syria: "Do you deny knowing most of moderates you directly backed fought alongside ISIS [Daesh] & AlNusra on front lines?"

"Absolutely do not deny," Ford tweeted back, "Criticized them in 2013 and 2014 and publicly a month ago. major problem for oppo[sition]."

"Whatever the outcome in Aleppo, critics argue the lack of a clear approach toward rebels weakens the US ability to help resolve the five-year civil war," Youssef underscores.

Indeed, while the White House and its two agencies are involved in internal infighting over who the real "moderates" are and whether the US military should target Daesh or Assad on the ground, the Russia-backed Syrian Arab Army is liberating Syrian towns and villages one by one from Islamic extremists.

"Just like we liberated Palmyra and many other areas before it, we will liberate every inch of Syria from their [terrorist] grasp. We have no choice other than victory, or else there won't be a Syria and our children will not have a present or a future," Syrian President Bashar al-Assad said Tuesday in a speech addressing the People's Assembly.