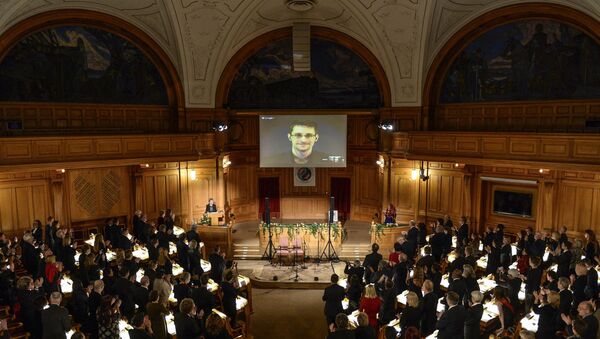 © AFP 2021 / PONTUS LUNDAHL / TT NEWS AGENCY
Subscribe
When US President Obama was granted a Nobel Peace Prize in 2009, the award's prestige was questioned: his bellicose administration failed to live up to his peaceable rhetoric. However, the country's ‘alternative Nobel Prize' which honors human rights merits and peace efforts, remained unscathed; unfortunately, it has recently landed in hot water.

Silence of the Swedes: Well-Known Writer Condemns Kingdom's Censorship
The Right Livelihood Award, which is commonly referred to as Sweden's alternative Nobel Prize, has been banned from official premises and will no longer be handed out in the country's parliament, the Swedish newspaper Svenska Dagbladet wrote earlier this week.

The Award, which has been presented in the Swedish parliament since 1985, became famous for such ‘controversial' laureates as whistleblower Edward Snowden. Curiously, it was the very same Snowden who landed the award in trouble last time. In 2014, the organizers were asked to clear out after notoriously decorating the former US intelligence officer and current Russian citizen.

The debate surrounding the Right Livelihood Award flamed up anew last month when parliamentary speaker Urban Ahlin of the Social Democratic Party told the Swedish national broadcaster SVT that "parliament was not a conference center for external actors." The decision to ban the ‘alternative Nobel prize' was upheld this week in parliament.

This European Country Has Huge Problem With Press Freedom
Right Livelihood Foundation director Ole von Uexkull accused the authorities of having a political bias and warned that the lack of government support spelled a "drastic worsening for Sweden's support of international actors for change in society."

The privately-funded prize was founded by Swedish-German philanthropist Jakob von Uexkull in 1980 after the Nobel Foundation refused to launch specific awards as a tribute to efforts in the fields of the environment and international development.

A total of 162 people and organizations from 67 different countries working for sustainable development, human rights and peace have so far been decorated with the award, including the UK-based Campaign Against Arms Trade and Swedish children's writer Astrid Lindgren.