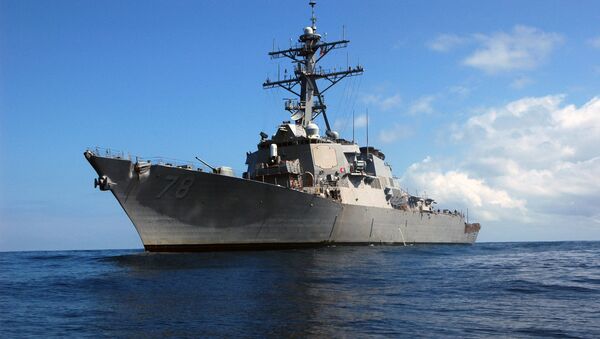 Months after Russian jets responded to the USS Donald Cook in the Baltic, a US destroyer is now testing the waters of the Black Sea.

On Monday, the guided-missile destroyer USS Porter entered the Black Sea to participate in bilateral military exercises as part of Operation Atlantic Resolve.

"The United States continues to demonstrate its commitment to the collective security of our NATO allies and support for our partners in Europe," reads a statement from the US Navy, adding that the ship’s operations are meant to "enhance maritime security and stability, readiness, and naval capability with our allies and partners."

The Russian government has criticized the presence of a US warship near its borders as a provocation and has vowed to take necessary countermeasures.

"American warships do enter the Black Sea now and then. Certainly, this does not meet with [Russia’s] approval and will undoubtedly lead to planning response measures," said Andrey Kelin, head of the Russian Foreign Ministry’s European Cooperation Department.

Kelin also expressed disapproval of the USS Harry S. Truman’s deployment to the Mediterranean, ahead of NATO’s Warsaw summit in July, a move he described as an obvious "show of power."

"There is nothing special about the movement of US vessels in this case. We know that aircraft carriers are moving the Mediterranean Sea and elsewhere, they have a right to do so, this is freedom of navigation," he said.

"But in general, this is a definite increase in [Russia-US] relations and all this is done ahead of the NATO summit in Warsaw – this is a demonstration of force."

The USS Porter is expected to make port calls while operating in the Black Sea.

"We will see how things move forward," Kelin said. "But overall, we can absolutely not give up on the most important channel of cooperation and dialogue."

US Government to Develop Airfields in Eastern Europe

"Permanent deployment of US destroyers in the European theater of war is already a provocation," he said, noting that there are four other similar US vessels permanently stationed at a Spanish naval base.

In April, the USS Donald Cook sailed near Russian waters in the Baltic Sea, resulting in its interception by a pair of Su-24 bomber jets. US officials described the jets’ maneuvers as "aggressive," as well as "unsafe and unprofessional."

Writing about the incident for The American Conservative, political commentator Pat Buchanan observed that "the Russian planes carried no missiles or bombs." This, he argued, was an indication that their "message [was]: What are the Americans doing here?"

"US warships based in Bahrain confront Iranian subs and missile boats in the Gulf. Yet in each of these regions it is not US vital interests that are threatened, but the interests of allies who will not man-up to their own defense duties, preferring to lay them off on Uncle Sam," Buchanan said.

"And America is beginning to buckle under the weight of its global obligations."