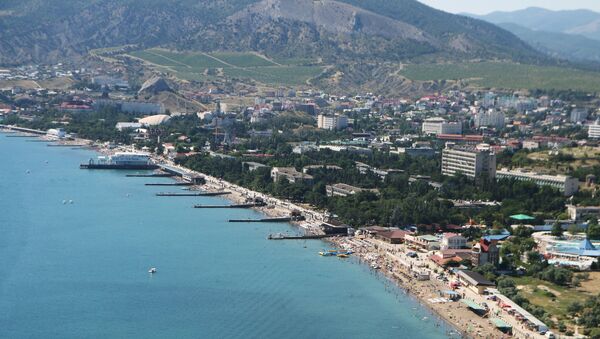 © Sputnik / Artem Kreminsky
/
Go to the mediabank
Subscribe
International
India
Africa
Andreas Maurer, chairman of the Die Linke party branch in the town of Quakenbrück in Lower Saxony, became the first German politician to publicly advocate recognizing Crimea as a part of Russia.

German Die Linke Party Preparing Lawmakers' Trip to Crimea
Maurer, who recently returned from his trip to the Crimean Peninsula, told Sputnik that because high-level politicians refuse to visit Crimea, the goal of his trip was to promote people's diplomacy.

"I was able to meet with representatives of the ethnic minorities – with Crimean Tatars, Armenians, Greeks… And I learned that these people feel themselves safe and secure," he said.

The politician added that he was also somewhat surprised by the actions of the Ukrainian ambassador to Germany who called the German Foreign Minister to condemn Maurer’s visit.

"It shows how nervous the Ukrainian side is. It means that Kiev is afraid of losing the ability to maintain the current sentiment towards Crimea," Maurer said.

He also remarked that during his trip to Crimea he failed to notice any effect from the anti-Russian sanctions, save perhaps for the fact that the local’s ability to travel abroad was effectively denied.

"It means that the West essentially punishes the people of Crimea for the referendum, and it worries me. But here in Germany the sanctions are also hurting us. The local businessmen are worried by sanctions, and are beginning to claim that the sanctions are pointless. Not a single sector of the German economy can afford to deprive itself of the Russian market in the long-term," he explained.

All in all, Maurer said that hopefully the politicians will eventually see reason and realize that simply ignoring the current situation in Crimea will get them nowhere.

"A popular vote is the highest form of legitimization. Personally, I have no doubts that the people made their decision voluntarily. And sooner or later the Western politicians will have to recognize this," Maurer surmised.