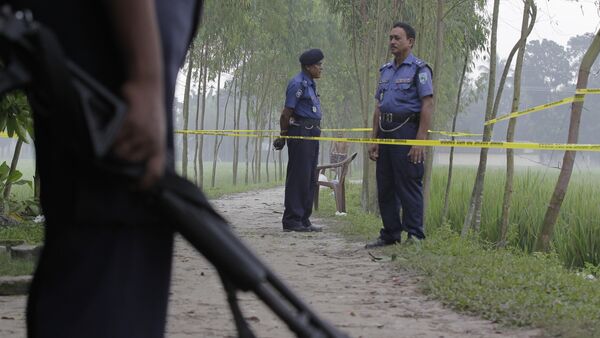 Bangladeshi government officials are struggling to deal with the rising Islamist insurgency in the country as a series of brutal assaults against non-Muslims continue to shame the nation.

India to Complete Fence Construction on Border With Bangladesh by Year-End
Nityaranjan Pandey, 50, who was living in a Hindu ashram (monastery) in the Muslim-majority country, was hacked to death by unknown attackers just outside his shelter. He was working at the Sri Sri Thakur Anukul Chandra Satsangha Ashram in Bangladesh’s north-western district of Pabna. He had been a volunteer at the monastery for nearly four decades and the locals say he did not have any enemies. His throat was slit with a sharp weapon indicating that the assailants were attempting to decapitate the victim.

To top that, Pandey’s death was consistent with the previous murders carried by Bangladeshi Islamists against non-Muslims including secular bloggers and Hindus. The police have opened an investigation into the latest incident but so far they have been unable to contain such lone-wolf attacks by Islamist extremists. While there are several suspects,  no group has yet claimed responsibility. Pandey’s brutal murder occurred just as the Bangladeshi government launched a nationwide operation to tackle the Islamist assaults.

Speaking to Sputnik, Jayant Prasad, director of the well-known think tank Institute for Defence Studies and Analyses, said: “In India, we’ve been watching with great disquiet the individual killings, which are very difficult for any government to deal with. The jury is still out on whether this is a widening problem. But, Daesh (Islamic State) has taken advantage of these killings of bloggers to proclaim they had a hand in it – which the government of Bangladesh has denied.”

Prasad, an expert on security affairs in the region, went on to say: “It is not the killings alone which are a problem, because sometimes with these murders, even the best security forces in the world are not able to prevent them. Somewhat of a disturbing situation is that after the killings, the track record in pursuing these culprits – bringing them to justice – the Bangladeshi authorities have been faltering at that. This means there is an atmosphere of intimidation that has grown in Bangladesh. So, the threat is small as of now, but the government has not figured a way to fix it. It is a worrisome trend. We hope that the Bangladeshi security agencies do a better job.”