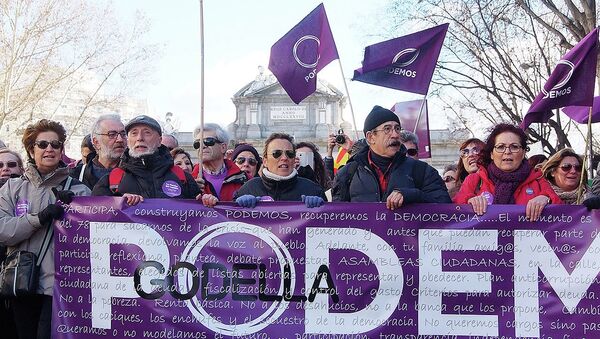 © Flickr / Vicente José Nadal Asensio
Subscribe
The left-wing Podemos party together with the United Left coalition may take the second place at the June 26 Spanish parliamentary elections, a poll revealed on Thursday.

Spain Bound for Constitutional Crisis as Podemos Spurns Deal
MADRID (Sputnik) —The research carried out by the Spanish CIS pollster showed that the group of left-wing parties may secure between 82 and 92 seats, or 25.6 percent of votes, comparing to 69 and two seats Podemos and United Left won at the previous election in December.

The conservative People's Party, chaired by Prime Minister Mariano Rajoy is expected to win and take between 118 and 121 seats with 29.2 percent of support, according to the poll. At the December general election, the party obtained 123 lower chamber seats, losing the absolute majority.

The social-democratic Spanish Socialist Workers' Party may receive 21.2 percent of votes, coming third, with 78-80 seats, against 90 in December, the poll revealed. The liberal Citizens party can count on 14.6 percent and 38-39 sets.

The June 26 elections were called after no party was able to secure majority at the December 2015 vote.