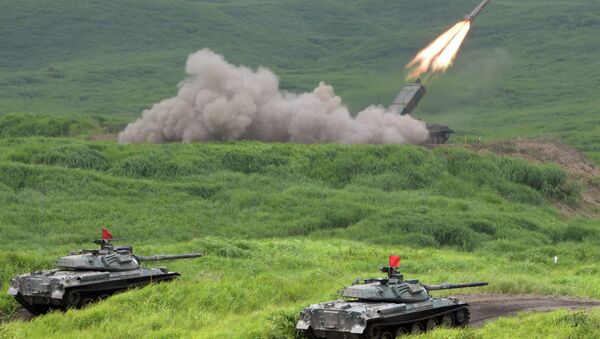 © AFP 2021 / TOSHIFUMI KITAMURA
Subscribe
The Japan Self-Defense Forces are ready to "react correspondingly" amid possible intrusion into the country's territorial waters, the chief of the JSDF's Joint Staff said Thursday.

Japan's Nuclear Watchdog Oks Use of Soil Freezing for Protection of Water
TOKYO (Sputnik) — The Japan Self-Defense Forces (JSDF) are ready to "react correspondingly" in an event of crossing into the country's territorial waters, Katsutoshi Kawano, the chief of the JSDF's Joint Staff, said Thursday.

Earlier in the day, Japan's Kyodo news agency said that Tokyo expressed concern over the crossing of a Chinese navy ship in a contiguous zone just outside Japanese territorial waters near the disputed Senkaku Islands in the East China Sea, which are claimed by both Tokyo and Beijing.

"The unilateral actions that result in increasing tensions are causing concern. We would like to avoid the escalation of the situation, but in the event of invasion into territorial waters, we will react correspondingly," Kawano said.

Moscow Hopes Japan Chooses Russian Technology for Water Decontamination
Kawano added, that the Chinese ship had been radio contacted but he did not elaborate on the details of the negotiations.

Relations between Japan and China have been strained by a dispute over uninhabited islands in the East China Sea. The Japanese, who have claimed the islands since the 19th century, call them the Senkaku Islands, the name mostly recognized globally, while in China they are known as the Diaoyu Islands.

In 2014, Japan and China agreed to reduce tensions over the disputed islands. However, Chinese vessels repeatedly intruded into Japanese territorial waters around the Senkaku Islands in 2015.