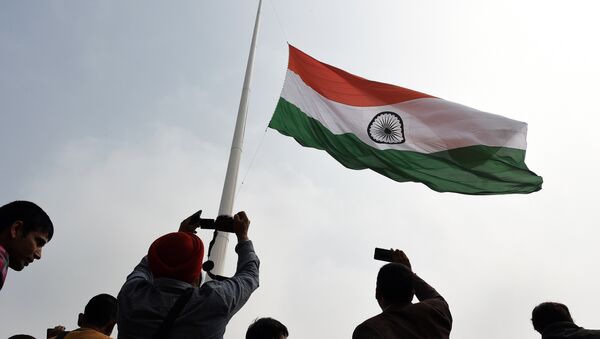 © AFP 2021 / MONEY SHARMA
Subscribe
India received another boost to its NSG membership after Mexico supported its crucial bid for the 48-member elite club. However it still faces opposition from the Chinese.

Quid Pro Quo: Will US Broker a Nuclear Deal Between India and China?
New Delhi – India takes another step towards membership of the Nuclear Supplier Group, as Mexico’s President supports its bid.

India secures another country's backing in its bid to become member of NSG: Mexico! https://t.co/wX4eQltxBS pic.twitter.com/sYqDBbbzWd

India’s membership to the NSG will soon be a boon for its nuclear energy sector as India has plans to derive about 40 percent power from nuclear energy. In this way India-Russia Nuclear partnership also likely to get boost.

India now has a majority of support for its bid to join the Nuclear Suppliers Group. However, China, along with other member countries, has been opposing India’s admission to NSG as India has not signed the nuclear Non-Proliferation Treaty.

India seems to have outplayed China in terms of diplomatic maneuverings leaving the great Asian nation somewhat isolated.NSG membership for India is crucial as it will give access to technology that will help it in a variety of areas, ranging from medicine to building nuclear plants.

"Getting membership of NSG will be very important for India as it will foster nuclear power generation in India. Apart from that it will also pave the way for India's own nuclear trade with other developing countries. After that, Indian suppliers and manufacturers of nuclear components can sell it other countries. India will also get the latest technology," Chintamani Mahapatra, Professor in Delhi's Jawahar Lal University told Sputnik.

India applied formally last month to for NSG membership, the organization which controls the commercial trade in nuclear technology.

Russia is among the foremost countries which backed India’s bid for the membership of the Nuclear Suppliers Group.