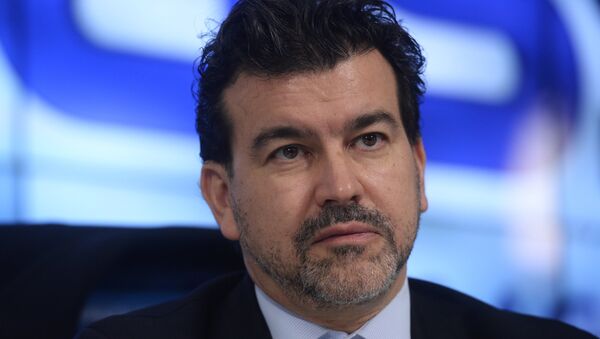 The French government is unlikely to follow the proposals of the upper and lower hoses of the French Parliament and lift sanctions against Russia as it is heavily reliant on US finances and is though obliged to follow Washington's foreign policy, a member of the French National Assembly's Defense Committee told Sputnik Thursday.

"The budget deficit, country’s international debt that is equivalent to 100 percent of GNP and dependency on the American bonds and banks force the French President Hollande to join additional NATO committees and be compliant with the American foreign policy to what concerns Russia. As the pressure from the American banks continues to rise, the  government feels trapped and is unlikely to lift sanctions against Russia because it would require a lot of bravery and courage," Nicolas Dhuicq said.

The United States, the European Union and some of their allies have imposed several rounds of sanctions targeting key sectors of the Russian economy, as well as a number of individuals and entities since 2014, over Crimea’s reunification with Russia and accusations of Moscow's alleged interference in the Ukrainian conflict.

Russia has repeatedly refuted the allegations, stating that Moscow is not a party to the Ukrainian conflict and warning that the Western sanctions are counterproductive and undermine global stability.