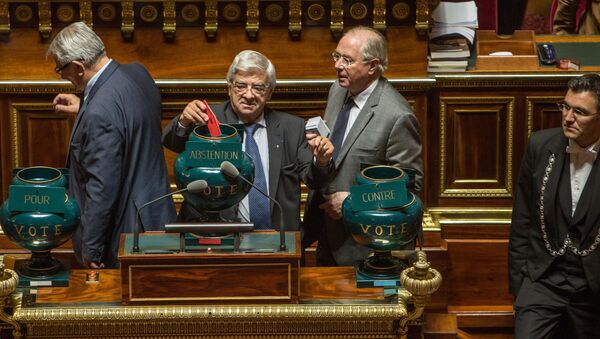 The damage dealt to France’s agricultural industry by Moscow’s food embargo was apparently one of the factors that motivated French senators to vote for easing the anti-Russian sanctions.

Easing Anti-Russia Sanctions Best Decision for France After Resolution
Earlier, the French Senate voted in favor of the resolution on the easing of anti-Russian sanctions, with 302 senators casting their votes in support of the initiative and only 16 opposing the move. The resolution calls on the French government to protest extension of EU sanctions against Moscow, and while it is not legally binding, it will be submitted to France’s leadership for consideration.

French newspaper Le Monde points out that after the National Assembly supported a similar resolution brought forward by Thierry Mariani in April, both the proponents and the opponents of this latest initiative took great care to prepare for the senatorial debates.

"France can both serve as a guarantor of Ukraine’s territorial integrity, as per the Minsk agreements, and as promoter of establishing the kind of relations with Russia that I would call normal," Senator Yves Pozzo di Borgo said.

He also reminded his fellow senators of the so called 'pig crisis', pointing to the poor state of affairs in France’s agricultural industry which, among other things, was dealt a serious blow by the food embargo imposed by Moscow in retaliation for the anti-Russian sanctions. According to the newspaper, this is a very sensitive issue for both senators and members of the National Assembly alike.

"The relations with Russia are too strategically valuable to be kept hostage by these debates on sanctions. They deserve better and should be projected farther, encompassing the fight against terrorism and the current situation in the Middle East," Senator Simon Sutour added.

The US and the EU imposed sanctions against select Russian individuals and the Russian defense, energy and banking sectors in July 2014. In retaliation, Moscow imposed a year-long food embargo on imports from the United States, the European Union and other countries that targeted Russia, subsequently extending the current embargo until August 5, 2016.

The EU leaders’ summit is scheduled for June 28-29. Extending the EU economic sanctions against Russia, which are due to expire in July, is likely to be on the summit's agenda.