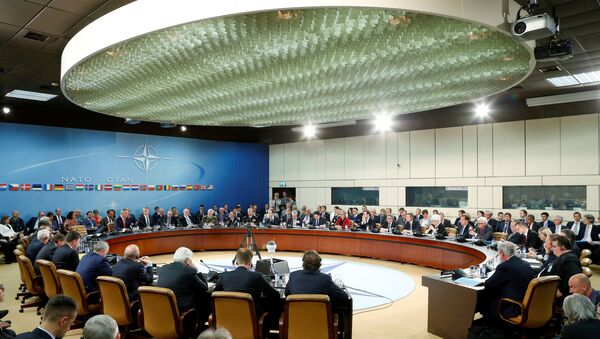 © REUTERS / Francois Lenoir
Subscribe
Before leaving his position in May, former NATO Supreme Allied Commander General Philip Breedlove recommended the alliance establish a mechanism for higher-quality military to-military communications with Russia, Breedlove said at an Atlantic Council event on the future of NATO.

WASHINGTON (Sputnik) — During Breedlove’s four-year command at NATO, the alliance fundamentally changed its posture toward Russia from partnership to strategic competition. Since 2014, NATO has increased the number and pace of its military exercises, while deploying rotational forces and prepositioning military equipment closer to Russia’s European borders.

"It would be good to have a broader NATO air, land, and sea [line of communications with Russia]," Breedlove said on Wednesday. He added that establishing a NATO-Russia mechanism "would not be an easy task but… I suggested it before I left."

Breedlove, who recently stepped down as the commander of NATO and head of US European Command, further emphasized the need for the United States to "establish quality communications with the Russians" to avoid unintended military incidents or escalations.

"It may be frustrated and frustrating in the beginning, but we really — I don’t think — have a choice."

He further underscored the urgency of opening US-Russian communications to build confidence between the two nations, saying the connection must be made "with purpose" and "with malice of forethought."

In 2014, relations between Russia and NATO deteriorated following the crisis in Ukraine after NATO leaders accused Russia of meddling in Ukraine’s internal affairs, which Moscow refutes.

The alliance suspended all military-to-military cooperation with Russia in March 2014, but left open the opportunity for political dialogue.