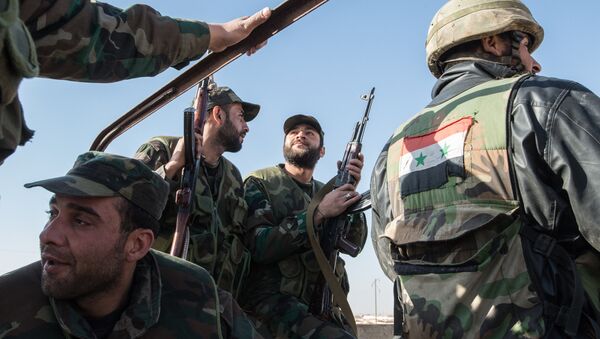 The Russia-backed Syrian Arab Army may retake Raqqa ahead of US-supported rebels, "poking the Americans in the eye" in the region they have long pledged to recapture.

As the Syrian Arab Army (SAA) is gaining ground at Raqqa's doorstep it seems increasingly possible that it will take over the Daesh stronghold ahead of US-backed forces.

Back on June 2, Al-Masdar News reported that the Syrian Armed Forces, backed by the paramilitary "Desert Hawks" kicked off an all-out offensive operation aimed at ousting Daesh from its de-facto capital.

"The SAA is competing with the US-backed Syrian Democratic Forces (SDF) to capture Raqqa from Islamic State although the SDF seems to have refocused its military strength on capturing Manbij city. Long-term, the capture of Manbij will enable the SDF to build a corridor and eventually connect with the Kurdish enclave at Efrin, a region in northwestern Aleppo," the media outlet wrote Tuesday.

Coming Close to Raqqa: This is How Daesh May Lose Battle for its 'Capital'
Al-Masdar News pointed out that Daesh commanders are facing a painful dilemma on how to "prioritize their scarce manpower" between the western Raqqa frontline and the Manbji frontline, "as it has become virtually impossible to contain both offensives at once."

In her recent interview with Radio Sputnik political analyst Catherine Shakdam has expressed her confidence that the SAA, assisted by Russian warplanes, will liberate the city of Raqqa soon. Shakdam envisages that the SAA could make major gains in Raqqa by the end of Ramadan, in early July.

By recapturing Raqqa ahead of the US-backed forces, the Russian and Syrian armed forces would "pok[e] the Americans in the eye in a place they have long talked of helping to recapture," William Wallis of the Financial Times noted Monday.

Indeed, Washington long ago pledged to liberate Raqqa and now is risking losing the race.

"This pincer movement is fraught with strategic risk. The most obvious danger is that a race to take the city could end up pitting the Americans, who have special forces with the rebel troops, against the Russians, who are backing Bashar al-Assad's troops at a time when both sides are supposed to be promoting peace via a political settlement," Wallis suggested.

Time to Free Raqqa: Daesh's Capital 'Will Be Retaken' by Syrian Army
He even went so far as to assume that the Russians and the Americans "could force their way in and end up in a more direct confrontation."

However, "it is also plausible that the Russians and Americans are now coordinating their approach," the journalist remarked, adding that this in itself bares risks, most notably for Washington, that could "jeopardize" trust among the rebels if there are suspicions that it cooperates with government forces.

Still, according to US Department of Defense spokesperson Peter Cook, the United States and Russia are not coordinating ground operations against Daesh in Syria.

"In terms of direct coordination of activities on the ground that is not happening," Cook stressed, explaining that the countries' joint memorandum of understanding allows the sides to ensure the safety of their aircraft operating in Syria.

"Although US officials play down the possibility, the Syrian government's drive into Raqqa could lead to a situation where the SDF and the Syrian regime are conducting simultaneous offensives to try and capture the [Daesh] stronghold," they noted, suggesting that the situation may aggravate further tensions between Moscow and Washington.

Dyer and Collard stressed that the SAA success "could have a significant impact on the broader war in Syria," swinging the balance in President Bashar al-Assad's favor. It is especially remarkable in the context of the SAA's recent victory in Palmyra.

The West has long been in denial of the fact that the SAA is a credible force in fighting against Daesh. The Syrian Armed Force's successful achievements on the ground have repeatedly proven this.