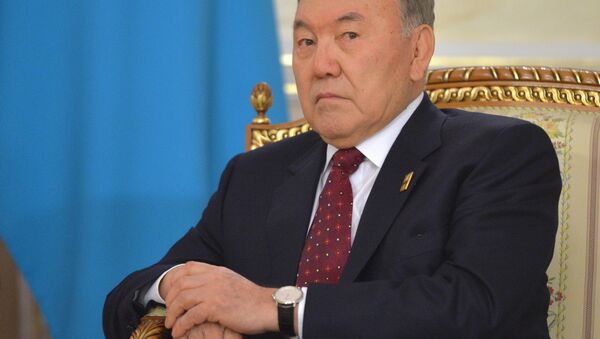 © Sputnik / Alexei Druzhinin
/
Go to the photo bank
Subscribe
The recent attacks in Kazakhstan's northern city of Aktobe are the signs of a planned color revolution that takes advantage of the country's liberal governance, Kazakh President Nursultan Nazarbayev said Wednesday.

External Pressure Creates Conditions for Color Revolutions - Official
MOSCOW (Sputnik) — Color revolutions occurred in Georgia, Kyrgyzstan and Ukraine and resulted in the overthrow of the countries' governments in 2003, 2005 and 2014 respectively.

"Taking advantage of our liberal government policies and laws, someone wanted to test the resolve of our government. I am stating that we will always take the harshest measures to suppress extremists and terrorists. The state has all the necessary means for that. We all know that the so-called color revolutions employ various techniques and start with contrived rallies, killings and the desire to seize power. These signs have appeared here," Nazarbayev said in a press statement published on the presidential website.

Countries that have undergone color revolutions do not have a functioning state, are unstable, poor and dangerous, as well as being a hotbed of extremism, Nazarbayev added, stressing that terrorism poses a threat to Kazakhstan that will be addressed with additional security measures that will later be evaluated and analyzed.

"I call on all Kazakhs to be vigilant and to firmly stop any calls to violent illegal actions, as well as helping security forces," the president said.

On Sunday, unidentified armed assailants attacked two gun shops and a military unit in Aktobe. In response, the country's authorities announced an anti-terrorism operation. On Monday, Kazakhstan's Interior Ministry said that five attackers were killed during the operation. The attackers were radical followers of non-conventional religious movements, according to Kazakhstan's Interior Ministry.