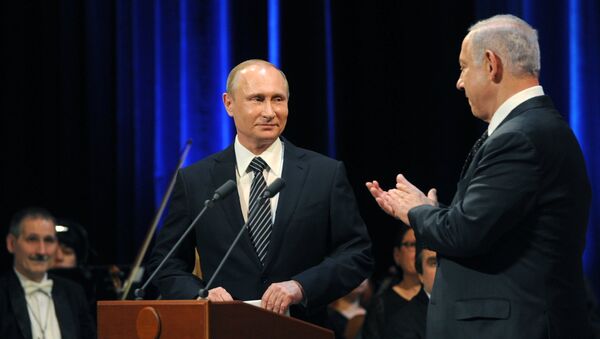 © Sputnik / Michael Klimentyev
/
Go to the mediabank
Subscribe
International
India
Africa
President Vladimir Putin and Prime Minister Benjamin Netanyahu have met for the third time in less than a year in what points to a blooming relationship between Russia and Israel in areas spanning security and economic cooperation. Trust, shared interests and most recently a tank have contributed to making these ties cordial.

Russia Could Replace US as Israel’s Primary Ally in Middle East
"Netanyahu's latest visit began with both sides enthusiastically showering each over with flattering remarks. The prime minister noted that more than a million Israelis speak Russian. Two ministers, who accompanied Netanyahu on his visit to the Kremlin, speak Russian from birth. Other [members of the delegation] also seemed to have understood the language," Lenta.ru observed.

In addition, the Magach tank brought Russia and Israel even closer to each other, the media outlet added. The Syrian army captured this peace of military hardware in 1982 during the First Lebanon War. It was later exhibited in Russia.

The tank will now return home, possibly offering closure to the families of the three Israel Defense Forces (IDF) servicemen, who went missing during the war.

"Israel has not experienced many military defeats, but those that did happen are very painful for the country. The Battle of Sultan Yacoub that saw the Syrians take the Magach is one of those," Lenta.ru observed.

Kremlin spokesman Dmitry Peskov attributed the increasing level of interaction between Moscow and one of Washington's closest allies to "the atmosphere of trust" in the bilateral relations. "There is a very constructive and trustworthy communication style between the president and the prime minister," he said on Tuesday.

As a result, cooperation between Russia and Israel has "a very positive foundation."

Pivot to Russia? Why Israel Could Shun Washington, Improve Ties With Moscow
For comparison: relations between US President Barack Obama and Netanyahu have been marred by enmity and dislike, particularly after Washington made every effort to ink a nuclear agreement with Iran.

This is not to say that Russia and Israel see eye to eye on every issue. After all, Moscow played a major role in convincing Tehran to constrain its nuclear program. Yet both countries appear to be willing to look for working solutions and leveraging the relationship.

"For Russia, developing ties with Israel is an important part of its overall effort to gain and maintain an enduring strategic foothold in the Middle East while also reducing US influence in the region," he added.

Xavier Colás raised a similar point in an opinion piece for El Mundo. Ties between Russia and Israel have intensified at a time when Washington's presence and power in the Middle East are less pronounced that a decade ago. Moreover, US foreign policy could change when a new president moves into the White House next year.

"In this new context, Moscow could be a key player [in the region] and Israel knows it," he noted.

Nevertheless, Israel's special relationship with the US will most likely remain largely unaffected. "Netanyahu's not defecting, but what we see here is a bid to maneuver independently to promote Israel's interests," Reuters quoted  Zvi Magen, a former Israeli ambassador to Russia, as saying.