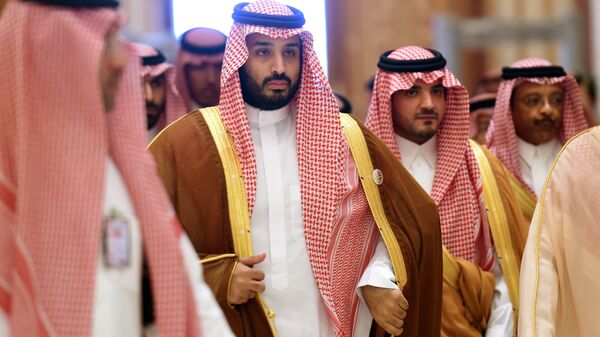 It seems that the Saudis will remember King Abdullah's reign as the period of guaranteed stability, while the rule of King Salman will be apparently associated with political turbulence, economic instability and sectarian violence, Catherine Shakdam, the Associate Director of the Beirut Center for Middle Eastern Studies, writes in her article for New Eastern Outlook.

However, it is not actually Salman bin Abdulaziz al-Saud who has contributed to the current political "fluidity."

"Actually, it is rather [the king's son] Prince Mohammad bin Salman, whose window of royal opportunity could be closing," Shakdam underscores.

Syrian Negotiations: Is Saudi Arabia Taking Russia's Side in Peace Talks?
Remarkably, the Saudi "game of thrones" is more about gambling, than cold calculating.

It his May opinion piece for The Vineyard of the Saker, Syrian political analyst Ghassan Kadi  noted that "the thirty year old Saudi Prince, Mohammad…, has risen to prominence by way of mere chance."

Kadi recalled that the once powerful Prince Bandar bin Sultan had made every effort to assume the throne.

"He was very well connected, very influential, and above all, the son of the prince (Sultan) who was meant to become king," the analyst noted.

Alas, King Abdullah had outlived both his brother Sultan and his half-brother Nayef. As a result, Prince Salman ascended to the throne in 2015. However, by then Salman was "79 years old and already suffering from Alzheimer's disease," Kadi underscored.

"It is tipped that Salman is going to soon change his Will and appoint his son Mohammad as the Crown Prince instead of Mohammed bin Nayef. In effect, [Mohammad bin Salman] is already acting like he is the king," he remarked.

"[Mohammad bin Salman] has witnessed the fall of Bandar and saw his mistakes. He has learned from this that he cannot rely on America as an equal ally. [He] obviously knows that the golden age of Al Saud is over. He knows that what seemed to be an endless wealth a few decades ago is coming to a sudden end, and sooner than anyone thought…  He is totally aware of the early signs of those reality checks, and he wants to do something about them. Whether he is going to be successful or not, is another story," the analyst noted.

It's All About Crude: How Saudi Arabia Fell Into Washington's Oil Trap
And still there are obstacles in the way of Prince Mohammad's dream. He is still a Deputy Crown Prince and if his father suddenly dies his cousin Crown Prince Mohammad bin Nayef, the Saudi Interior Minister, will inherit the kingdom.

Karen Elliott House of the Harvard Kennedy School noted in her report for the Belfer Center for Science and International Affairs that many Saudis believe that after assuming the throne Mohammad bin Nayef "would waste little time" before removing his cousin from power.

So, what are Mohammad bin Salman's options?

According to Shakdam, the ghost of "soft coup d'etat" is prowling around the palace.

She calls attention to a report published by Press TV on June 1.

"Saudi Defense Minister and Deputy Crown Prince Mohammad bin Salman has issued orders to the Saudi court banning any manner of meeting with the king due to his 'brain damage,' said the report published by the Palestinian Manar online newspaper on Wednesday, citing an informed source. The denial of visiting rights encompasses all members of the royal family and foreign dignitaries," the report reads.

Saudi Game of Thrones Threatens World Economy
Shakdam believes that it means that Prince bin Salman has "quite loudly" staked his claim on the throne.

And still "a young, inexperienced, and belligerent prince, Mohammad bin Salman is not everyone's choice — not in the kingdom, not across the region, and not throughout the international community," she stresses, adding that the prince may even face resistance from the kingdom's Wahhabi clerics.

She emphasizes that even if the prince comes to power, the future of the Saudi kingdom is murky.

"Mohammad bin Salman is trying to portray himself, especially to Saudi youth, as a national reformist and savior. But little does he realize that nation-builders need to perform… For him to perform, he needs not only leadership substance, but also popular support. The support he is receiving is a little more than well wishes, and the performance he is exhibiting, is little more than failed gambles."