Why Claims of Russia's Role in EU Refugee Crisis Are Groundless 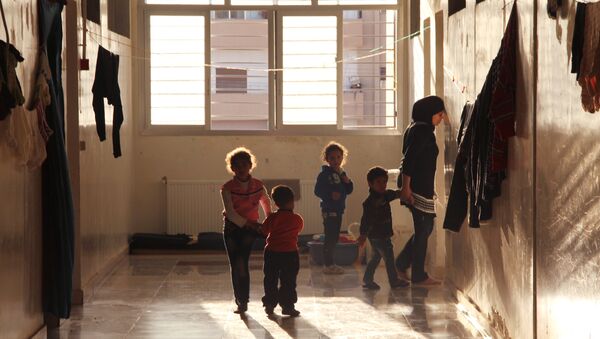 Hypotheses that Russia is allegedly seeking to deliberately exacerbate the current migration crisis in order "to weaken Europe" have nothing to do with reality and can rather be attributed to conspiracy theories, Focus Online wrote.

Russia Delivers Two Tons of Humanitarian Assistance to Syrian Refugees
According to Eastern Europe expert Eberhard Schneider Russia is too smart to deliberately escalate the situation in Europe. Therefore, the assumptions that Moscow is trying to weaken Europe by means of the migration crisis are very questionable, he argued.

Earlier such assumptions were made by several Western politicians, including John McCain and EU Commissioner Johannes Hahn. However, Focus Online experts reviewed these assumptions and came to the conclusion that the current migration crisis doesn't have much to do with Putin's influence.

Assumption 1 — More and more Chechen refugees are heading to Germany

The was the first hypothesis published by the newspaper Die Welt and claimed Putin was deliberately sending Chechen refugees to Germany and as a way to demonstrate his power.

According to German expert Stefan Meister from the German Society for Foreign Policy, people actually have "a lot of reasons to leave Chechnya." The researcher believes that the statement about Putin directing Chechen refugees to Germany falls into the category of a conspiracy theory.

The second hypothesis is based on the fact that in recent months Norway and Finland have been flooded by refugees from Central Asia, who previously used to move to Russia and work there. EU Commissioner Johannes Hahn suggested that the Turkmens and Tajiks are going to Europe against their will; that Russia deliberately was sending them to Europe to aggravate the current migration crisis.

According to Meister, such an assumption is doubtful and based only on an "interpretations of Russian actions." Eberhard Schneider also believes such statements are exaggerated and "unconvincing."

"The assumption that the refugee crisis has been staged by Putin for the purpose of weakening the EU and the Chancellor is, in my opinion, unconvincing," he said.

The third suggestion was made by US Republican Senator John McCain. According to him, the aim of the Russian military operation in Syria was to spur the flow of migrants to Europe and divide the EU and the United States. He also said that Putin "wants to exacerbate the refugee crisis and use it as a weapon."

Cold Shoulder: Norway's Rejected Refugees Dumped Off in Arctic Russia
However, Meister believes that one should be careful with such accusations. He said that at some point Russian bombings could have increased the number of refugees to Europe, but it is very unlikely that this was a part of Moscow's strategy.

Thus, both experts believe the scenario in which Russia is trying to influence Europe by means of the migration crisis is very questionable.