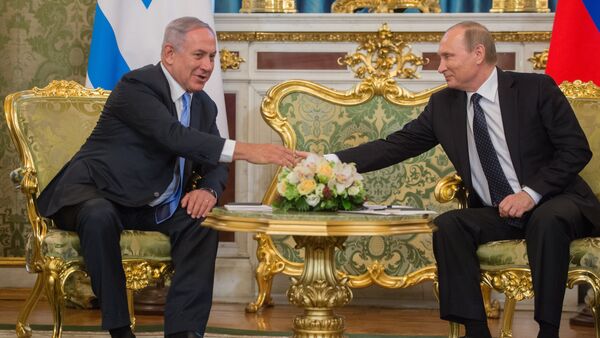 It is Netanyahu's fourth face-to-face meeting with the Russian President in less than a year. For comparison's sake, the Israeli Prime Minister has met US President Obama only once in the last year.

Remarkably, Russia's support to Damascus and Tehran, not to mention the sale of the advanced S-300 surface-to-air missile defense system to Iran by Moscow, have not casted the shadow over the relationship between Russia and Israel.

"Russia today is a world power and its relations with Israel are only growing stronger and deeper," the Jerusalem Post stressed citing Netanyahu.

This remark is especially interesting in the context of the Western sanctions policy unleashed by the US and the EU against Moscow following Crimea's reunification with Russia.

Israel Gov't to Replace Magach Tank in Russian Museum With Same Model
What lies at the root of the Russo-Israeli rapprochement?

Dan Williams and Denis Dyomkin of Reuters draw attention to the fact that Israeli Prime Minister Benjamin Netanyahu "has been a more frequent and feted visitor to Moscow than Washington."

While no one expects that Tel Aviv will break up its alliance with the United States, it is obvious that Netanyahu is "mindful of Putin's sway in the Syrian civil war and other Middle East crises as the US footprint in the region wanes," the journalists stress.

Furthermore, according to the journalists, Russia is now "the closest thing to a guarantor" that Israel's "most potent enemies" — Iran and Syria — would restrain themselves from attacking the country.

In exchange Netanyahu may offer the Kremlin "reciprocal Israeli restraint in Syria" as well as a more important role at the Israeli-Palestinian negotiating table, thus far recognizing Russia's strengthened geopolitical positions on the Middle Eastern arena.

There are sings showing that the Moscow-led peacemaking efforts may be under way, the journalists suggest.

"When Netanyahu last came, in April, it was three days after a visit by Palestinian President Mahmoud Abbas. On Wednesday, when Netanyahu departs, Russian Foreign Minister Sergei Lavrov is scheduled to host Palestinian counterpart Riyad al-Maliki," they point out.

Coincidence? Palestinian FM Says Moscow Trip Unrelated to Netanyahu's Visit
But this is half the story: the journalists believe that Netanyahu is seriously concerned about the prospect of Washington and Paris' backing the future UN Security Council resolution aimed against Israeli settlements on Palestinian land.

Given this, Netanyahu is interested in seeking more close relations with "veto-wielding" Russia, Williams and Dyomkin deem.

It should be noted that clouds are gathering on Netanyahu's horizon: he has been repeatedly subjected to attacks from Israel's influential Commanders for Israel's Security (CIS) movement.

The movement, comprising retired top level officers of Israel's Defense Forces (IDF), Mossad intelligence service, Shin Bet and Israel Police, has recently criticized the Israeli Prime Minister for "passivity" and "inaction" in solving the longstanding Israeli-Palestinian conflict. Furthermore, they presented their own vision on how the conflict should be settled. Reportedly, the CIS initiative was backed by Washington policymakers.

In light of this, it is hardly surprising that Netanyahu is bolstering his ties with Moscow, regardless of Washington's displeasure.