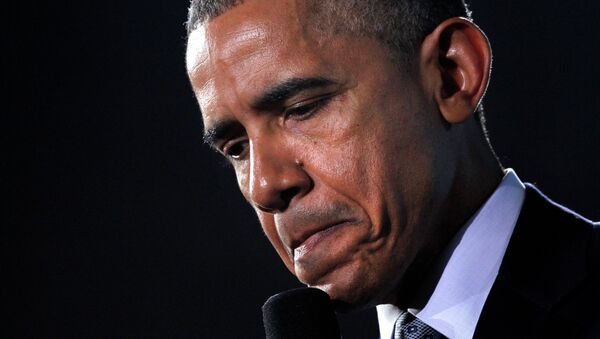 The United States edges toward another recession, with the worst job creation figures in half a decade, but the Obama administration tells the public the market is booming.

This month US employment growth came to a virtual standstill, with the economy producing only 38,000 new jobs, an amount that fails to keep up with population growth. Economists agree that the market must produce a minimum of 150,000 new jobs each month to prevent an increase in unemployment, but May data shows that the unemployment rate dipped to 4.7%, from 5% in April.

In late 2011, with President Obama’s reelection bid just beginning, his administration moved to redefine the term 'unemployed,' to suppress the real number. The change caused the US jobless rate to collapse from a level stubbornly hanging at 9% down to 7.1% by the time of the November 2012 elections.

Historically, a worker was considered unemployed even if they had been out of work for as many as 24 months, but the Obama administration pushed the Bureau of Labor Statistics to collapse that figure down to 12 months, creating the appearance of a recovering economy.

The change came just months after a move by the Bureau of Labor Statistics to increase the upper limit of how long a person could be listed as unemployed, from two years to five years, citing an "unprecedented rise" in long-term unemployment.

In early 2011, the economy remained mired in the aftershocks of 2008’s Great Recession, and BLS officials were "afraid that a cap of two years may be 'understating the true average duration of unemployment,' but they won’t know by how much until they raise the upper limit," said Cornell’s Linda Barrington.

The Labor Department economists never found out by how much the economy was struggling, as within months of making the change, the unemployment rate jumped nearly a full percentage point, before the Obama administration moved to mask the data.

On Monday, Loud & Clear’s Brian Becker sat down with London economist Steven Keen to talk about a fraudulent recovery once again making headlines, differing so radically from the real experiences of the American workforce.

How could the unemployment rate drop in such a weak economy?

"It has gotten to the stage where the American economy is virtually beyond a joke," said Keen. "The only thing that I can compare American unemployment to is weak underproduction under Stalin, when you wouldn’t dare to report bad data."

"Looking at the number who reported as employed, it was 63% of the population during the boom period, it fell to a bottom of 58%, and it is now up to just below 60%. In other words, it should be 4% higher, if the data means that we are booming again," said the economist.

Keen argued that the data on the number of new jobs is more accurate than the unemployment figure because, "the unemployment data does not include many people who tick a number of boxes, including those who answer that they have been looking for work for over a year."

"It is the sheer level of discouragement of people not being able to get jobs in a slumping economy that is why Trump is getting so much support," said Keen. "People look at what they are being told from official outlets, which are just myths that don’t match with what they are living through."

What is the point of having employment data if it does not use accurate information?

The economist explained that, beginning in 1973, when the world’s economy began to restructure from industrial and manufacturing toward more service-based markets, countries pushed the international labor office to come up with ways to redefine unemployment.

"I think there are 20 different technical ways that unemployment was redefined to, at the time, and every single way reduced the unemployment figure that was reported. But the Americans went further, with U3, which is the figure that they publish that does not include discouraged workers," said Keen.

"To me it is really a case, as are so many other policy changes that occurred in the last 40 years, of disguising that the system is not working as well as its proponents say it is," he said.