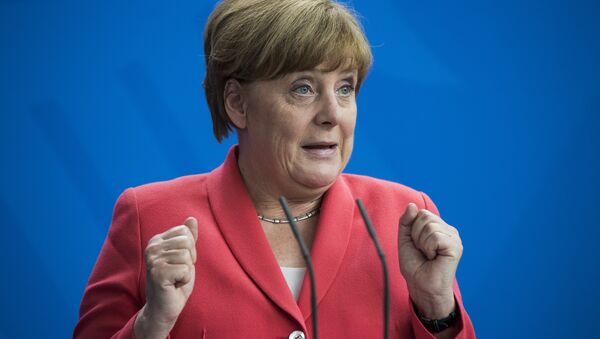 The row over Germany’s decision to formally recognize the Armenian genocide has deepened, with Chancellor Angela Merkel hitting back at criticism from Turkish President Recep Tayyip Erdogan. The dispute comes as some German MPs reported receiving death threats.

"The resolution was a political initiative that emerged from the midst of the Bundestag, which is a democratically elected, independent organ under our constitution," he said.

"The Bundestag reached a sovereign decision. That must be respected," he added.

Following last week's vote, Erdogan embarked on a series of angry tirades aimed at Berlin, saying he would "never accept the accusations of genocide."

"First you need to answer for the Holocaust, then for the murder of 100,000 people in Namibia," Erdogan said.

The recognition of the so-called "Tutu genocide" in Namibia, by Germany, acknowledges today by Turkey is total nonsense

Difference with Germany and Turkey that Namibia is independent from Germany, while the West Armenia, is still occupied by Turkey.

​​The president then accused 11 German MPs with Turkish heritage, who backed the resolution of supporting "terrorism" committed by the banned Kurdish Workers' Party (PKK), and demanded they undertake "blood tests" to see "what kind of Turks they are."

These comments were backed up by the Mayor of Ankara, Ibrahim Melih Gokcek, who tweeted a picture of the politicians along with the hashtag: #TheTraitorsMustLoseTheirCitizenship.​

Turkey Accused of Denial Over Armenian Genocide Amid Diplomatic Spat
Berlin was quick to hit back at the criticism however, with Seibert saying that although Germany also recognizes the PKK as a terrorist organization, "to associate individual members of parliament with terrorism is utterly incomprehensible to us."

The increase in political rhetoric comes amid a sinister turn in the genocide row, with Green Party co-leader Cem Ozdemir, who also has Turkish heritage, receiving anonymous deaths threats.

Erdogan singled out Ozdemir for his role in putting forward the resolution, while the MP is now under police protection.

​"The votes in the German Bundestag aren't made depending on which authoritarian leaders are happy and which ones aren't," he said, in an attack back at the Turkish president.

While there was anger within Germany's Turkish community over the genocide vote, many have slammed the actions of Turkish officials, including president Erdogan.

"I think the era when people were defined by their blood ended in 1945. This is absolutely out of place."

The diplomatic row comes amid a delicate time in Turkish-German relations, with concerns it may scupper the refugee deal negotiated between Brussels and Ankara, with Turkish Foreign Minister Mevlut Cavusoglu telling broadcaster TRT that the government "will take action against the German parliament's resolution. We cannot stay silent."