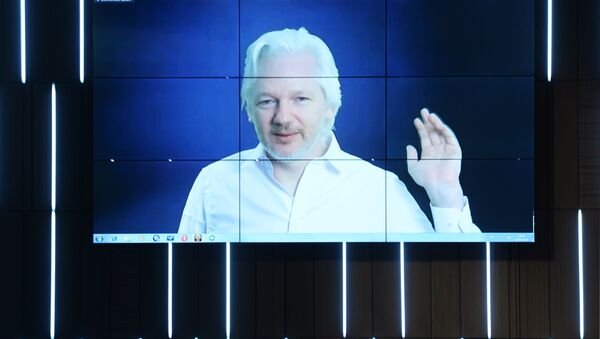 © Sputnik / Mikhail Voskresenskiy
/
Go to the photo bank
Subscribe
Addressing International Media Forum "New Era of Journalism: Farewell to Mainstream", Julian Assange said that about 80 percent of the US National Security Agency budget is privatized. He also said that Google is engaged with the US White House and Hillary Clinton's elections campaign. Google has power to control information flow, he added.

As much as 80 percent of the US National Security Agency’s (NSA) budget is privatized, demonstrating the merger between Washington and corporate organizations, WikiLeaks founder Julian Assange said Tuesday. 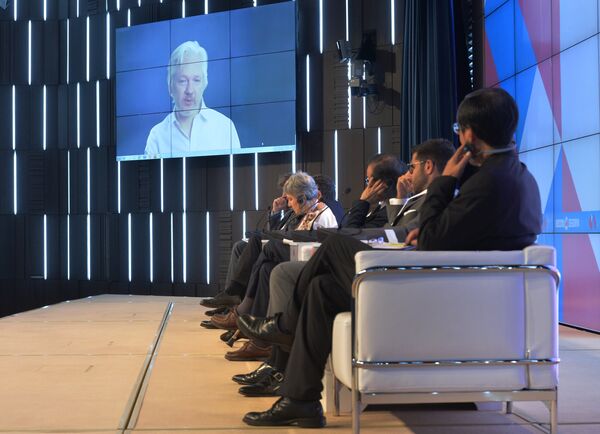 A video link up with Julian Assange, journalist, founder and editor-in-chief of WikiLeaks, at the session, End of the Monopoly: The Open Information Age, held as part of the New Era of Journalism: Farewell to Mainstream international media forum at the Rossiya Segodnya International Multimedia Press Center.
© Sputnik / Alexei Kudenko
/
Go to the photo bank

"There is a merger between the corporate organizations and state…80 percent of National Security Agency budget is privatized," Assange said via video link at the international media forum "New Era of Journalism: Farewell to Mainstream" hosted by Rossiya Segodnya International Information Agency, stressing that the vast majority of the funds in the budget came from private companies.

William Binney: NSA Surveillance Takes a Page From Nazi Germany
"[The NSA] is the core of the US deep state… There has been a smoothing out between the government and the corporations," the whistleblower stressed.

US tech giant Google is heavily integrated with the US establishment and is allying with the US exceptionalism campaign, WikiLeaks founder Julian Assange said.

"Google is heavily integrated with Washington power, at personal level and at business level… Google which has increasing control over the distribution channels… is intensely allying itself US exceptionalism," Assange said via video link at the international media forum "New Era of Journalism: Farewell to Mainstream" hosted by Rossiya Segodnya International Information Agency.

Le Pen Insists France Give Political Asylum to Julian Assange
According to the whistleblower, Google has turned into a "traditional US state power," reminding that its former CEO Eric Schmidt was now heading the Pentagon innovation board.

The whistleblower called Hillary Clinton a problem for freedom of speech in the US.

"Of course she when she is in power… She is problem for freedom of speech."

He added Clinton was a predictable politician, unlike her Republican rival Donald Trump.

"We know what she is going to do. And she made the chart for the destruction of Libya, she was involved in the process of taking the Libyan armory and sending it to Syria," Assange said. 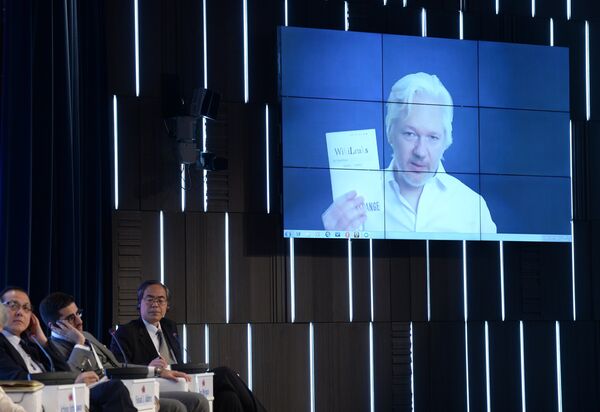 A video link up with Julian Assange, journalist, founder and editor-in-chief of WikiLeaks, at the session, End of the Monopoly: The Open Information Age, held as part of the New Era of Journalism: Farewell to Mainstream international media forum at the Rossiya Segodnya International Multimedia Press Center
© Sputnik / Sergey Pyatakov
/
Go to the photo bank

"It [Google] shows will to use that at different levels. It will inevitably influence its audience," Assange said, pointing to Google using its front page to "promote [US State Secretary] John Kerry's call for bombing on Syria in 2013" and conspiring with "Al Jazeera to encourage Syrian defectors."

Moreover, US tech giant Google views China as a rival, as it is closely allied with the United States, WikiLeaks founder said.

"I see Google exit from China…It seems much more to do with Google's feeling that it is part of ‘family America’ and that it is opposed to the Chinese," Assange said via video link at the international media forum "New Era of Journalism: Farewell to Mainstream" hosted by Rossiya Segodnya International Information Agency.

The whilsteblower said he felt that China was former Google's CEO Eric Schmidt's "rival, his enemy."

According to Assange, Washington feels threatened by China. 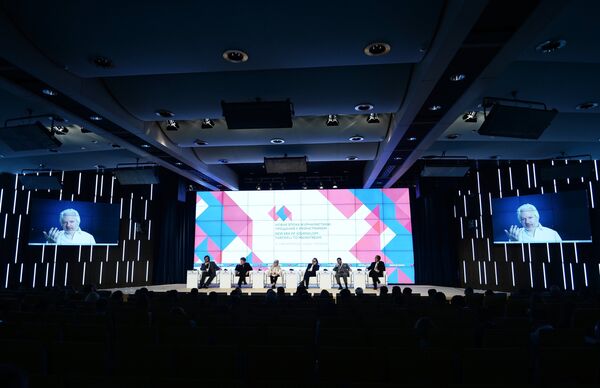 A video link up with Julian Assange, journalist, founder and editor-in-chief of WikiLeaks, at the session, End of the Monopoly: The Open Information Age, held as part of the New Era of Journalism: Farewell to Mainstream international media forum at the Rossiya Segodnya International Multimedia Press Center
© Sputnik / Maksim Blinov
/
Go to the photo bank

The US government can put pressure on Facebook, which in turn influences how the platform users act on it and what they say, WikiLeaks founder Julian Assange said on Tuesday.

"The US apparatus can squeeze Facebook, Facebook squeezes your capital, you don't want to risk losing your capital so you start to adjust reportage as an individual, you start to adjust the things you say," Assange said via video link at the New Era of Journalism: Farewell to Mainstream international media forum hosted by Rossiya Segodnya International Information Agency.

Assange delivered his speech remotely via a video conference from the Ecuadorian Embassy in London, where he has been residing since August 2012.

Assange launched the WikiLeaks website in 2006. Since then, the site has released millions of classified diplomatic documents from around the world on espionage practices, war crimes, torture and many other human rights violations. The US charges against the whistleblower include espionage, conspiracy, theft of government property and computer fraud — for which Assange could face about 45 years in prison.

Ecuador's decision to grant Assange asylum helped him avoid prosecution by the United States over a range of controversial revelations made by his whistleblower website.

000000
Popular comments
It is Great to have people like Julian Assange , Edward Snowdon and many other corroguos journalist that have done so much to open the Mind of the People of the World on what is realy going on around them. Disgusting injustice that they should not endure and hope soon the table will turn !
rishardhawk
7 June 2016, 15:59 GMT3
000000
Wonder he was as good as being lock up but where and how he still have access to these information. And secondly how can an average person can do without google. Seems like Google is every thing on the Internet.
peaceactivist2
7 June 2016, 16:07 GMT
000000
Newsfeed
0
New firstOld first
loader
LIVE
Заголовок открываемого материала
Access to the chat has been blocked for violating the rules . You will be able to participate again through:∞. If you do not agree with the blocking, please use the feedback form
The discussion is closed. You can participate in the discussion within 24 hours after the publication of the article.
To participate in the discussion
log in or register
loader
Chats
Заголовок открываемого материала
Worldwide
InternationalEnglishEnglishMundoEspañolSpanish
Europe
DeutschlandDeutschGermanFranceFrançaisFrenchΕλλάδαΕλληνικάGreekItaliaItalianoItalianČeská republikaČeštinaCzechPolskaPolskiPolishСрбиjаСрпскиSerbianLatvijaLatviešuLatvianLietuvaLietuviųLithuanianMoldovaMoldoveneascăMoldavianБеларусьБеларускiBelarusian
Transcaucasia
ԱրմենիաՀայերենArmenianАҧсныАҧсышәалаAbkhazХуссар ИрыстонИронауОssetianსაქართველოქართულიGeorgianAzərbaycanАzərbaycancaAzerbaijani
Middle East
Sputnik عربيArabicArabicTürkiyeTürkçeTurkishSputnik ایرانPersianPersianSputnik افغانستانDariDari
Central Asia
ҚазақстанҚазақ тіліKazakhКыргызстанКыргызчаKyrgyzOʻzbekistonЎзбекчаUzbekТоҷикистонТоҷикӣTajik
East & Southeast Asia
Việt NamTiếng ViệtVietnamese日本日本語Japanese中国中文Chinese
South America
BrasilPortuguêsPortuguese
NewsfeedBreaking
01:19 GMTUS Should Stop Dragging Taiwan Into War, China Says
01:04 GMTTrump's 'TRUTH Social' App Expected to Gain Popularity, Face Censorship Issues, Experts Say
00:54 GMTPentagon Chief May Have ‘Overplayed’ Role in Promoting Ukraine NATO Bid, Experts Deem
00:45 GMTFlorida's DeSantis Strikes at Vaccine Mandates by Posting His Rendition of 'Don't Tread on Me' Flag
00:41 GMTIDF Training ‘Intensely’ for Strike on Iranian Nuclear Facilities, Israeli Media Claims
00:21 GMT‘Sounds a Little Scary’: US Media Calls Deripaska ‘Russian Oligarch’ to Confuse People, Journo Says
00:20 GMTRepublicans Block Voting Rights Legislation, Reigniting Debate Over Ending Filibuster
00:04 GMTTexas Asks Supreme Court to Keep Abortion Ban in Place
YesterdayNYC Judge Reportedly Denies Maxwell's Request for Closed Jury Selection Ahead of Trial Start
YesterdayUK Queen Elizabeth II Spent Night at Hospital - Report
YesterdayHuman Bones Found in Florida Wilderness Park Confirmed as Belonging to Brian Laundrie
YesterdayHaitian Police Chief Steps Down as Crime Wave Hits Country
YesterdayWall Street Cruises to Record Highs for S&P 500, Nasdaq as Tesla Has Bumper Quarter
YesterdayIsraeli NSC Head Secretly Visits Paris to Defuse Tensions Over Pegasus Spyware - Reports
YesterdayFormer Italian Prime Minister Acquitted of Bribing Witnesses - Reports
YesterdayUS Federal Reserve Issues New Rules to Restrict Stock Trading by Central Bank Employees
YesterdayEx-Trump Aide Steve Bannon Found in Contempt of Congress Over Capitol Riot Probe
YesterdayIMF Says Engaging With El Salvador on Bitcoin
YesterdayVideo: Former Alitalia Flight Attendants Strip Off Uniforms in Flash Mob Protest
YesterdayHouthis Claim Ballistic Missile Attack on Jazan Command HQ Killed, Wounded 35 Saudi Troops