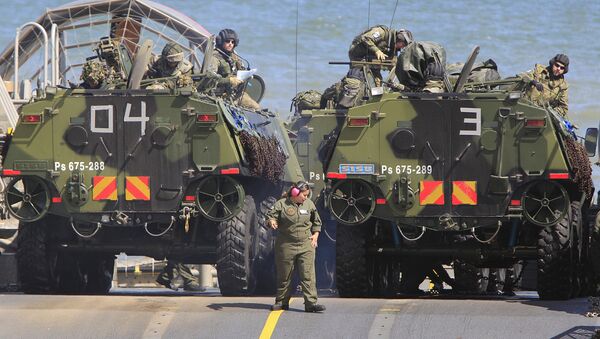 The war games, launched on Monday, will run until June 17.

Where Will America Invade Next? Pentagon Plans to Deploy Troops ‘Anywhere’
The analyst, who heads the Centre for Research on Globalization, pointed out that they coincide with the 75th commemoration of Operation Barbarossa, the invasion of the Soviet Union by the Nazi Germany that began on June 22, 1941.

Nevertheless, Chossudovsky maintained that Anakonda 2016, like other NATO drills, does not pose an immediate, particular military threat to Moscow, although the bloc's buildup is indeed a matter of grave concern.

While Anakonda 2016 is "taking place at Russia's doorstep, it does not imply that Russia is threatened at least in the immediate future," he noted.

Chossudovsky's logic is simple: there is nothing secretive about the bloc's war gaming.

"History tells us that war plans are based on deceit. In this particular case these deployments in Eastern Europe and the Baltics are open. Everybody knows about them, they are in the public domain. They are part of a propaganda campaign. They are talking points of the media," he continued.

This is what makes them different from the Nazi offensive on the Soviet Union. "Operation Barbarossa was a secret operation. At the time the relations between Nazi Germany and the Soviet Union were normal in terms of trade," the analyst observed.

Baltops 2016: NATO Responds to 'Russia's Ability to Defend Itself'
​Yet NATO's war-games, according to Chossudovsky, have a nefarious purpose.

The bloc's saber-rattling is meant to "threaten" Russia, but "not with military action." However, their main goal is "essentially to give leeway to the United States to wage its wars in other regions of the world, particularly in the Middle East."