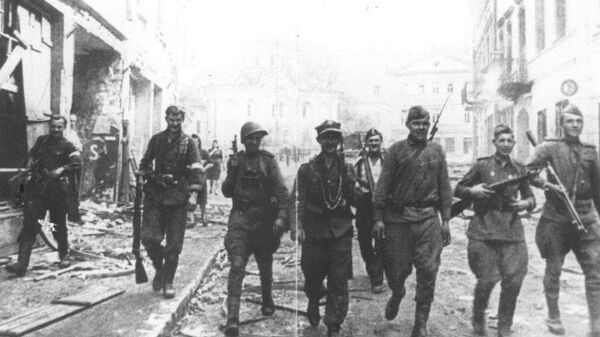 Nikolai Gorshkov
All materials
Ceremonies in Normandy mark the 72 anniversary of D-Day that opened the Second Front in the war against Nazi Germany. It was a culmination of East-West cooperation, with the Soviet Union launching its own massive offensive to help the Allied effort. But it's largely forgotten in the West.

In the small hours of June 6, 1944 General Eisenhower and his staff gathered at their Portsmouth HQ, battered by driving rain and gale force winds that threatened to derail the cross-Channel attack on Hitler's Fortress Europe, which took years to agree and months to prepare. The window of opportunity for the start of Operation Overlord seemed to have closed. Then, as if by a miracle, the downpour suddenly stopped. Eisenhower thought for a few moments and then spoke quietly: "O.K., let's go."

His words heralded the opening of the Second Front against Nazi Germany, a momentous event in East-West relations.

One week into the fighting on the Western Front, answering a question about his assessment of the D-Day landing, Stalin called it "a brilliant success of our Allies. The history of wars does not know another endeavor equal in design, scope and mastery of execution. History will mark this out as an achievement of a highest order."

Was it just a diplomatic nicety, as Stalin was finalizing his own preparations for what became arguably the single most successful military achievement of the entire war?

Two weeks after the D-Day landings, while the Allied troops were still pinned down by German fire to the Normandy beaches, the Red Army began Operation Bagration, named after a Russian-Georgian hero of the 1812 war against Napoleon. Within a month it annihilated the Army Group Centre, the engine of the German war machine on the Eastern Front, which controlled the shortest route through Belorussia and Poland to Berlin.

But while almost everybody in the West knows about the D-Day landings, very few people have heard anything about Operation Bagration. And with the current efforts in the West, and especially in Eastern and Central Europe, to rewrite the history of WWII, fewer still are likely to ever learn about it. All they will know is that liberation of Europe started with the D-Day landings.

However, leading British and American historians of WWII agree that the sheer size of Bagration dwarfs that of D-Day.

"You had ten times as many Russians fighting in Bagration as you had Anglo/American/Canadian troops landing on the Normandy beaches. And you had three times as many Germans in action fighting trying to hold up the Russian advance as you had defending the Atlantic Wall [German defenses in Normandy]."

On the Eastern Front Germany and her allies (Finland, Hungary, Romania) had about 228 divisions, compared with 58 divisions in the West, only 15 of which were engaged in the Normandy battle in its initial stages.

Despite this disparity in numbers the two Allied offensives had some striking similarities. Both involved sophisticated deception of the enemy, and ingenuity in crossing extremely difficult terrain under heavy fire.

"When D-Day and Bagration jumped off, the allied armies in Normandy and the Russian armies on the Eastern Front were equidistant from Berlin, and in the German view they were sort of equal threats," said Professor Wawro.

However, Richard Overy, Professor of history at the University of Exeter disagrees:

"The German Army was well aware of the greater threat. There was no major movement of manpower westward to cope with the invasion of France. The Allied bridgehead in Normandy was contained, though not eliminated, with the troops already there."

And the quality of German troops facing the Western Allies left a lot to be desired, said Professor Overy.

"Many of these divisions were largely made up of older soldiers — a quarter of the German army was over 34 by 1944 — and some of the units manning the defenses, composed of wounded [soldiers] from the eastern front and men of poorer physical condition, had low combat effectiveness.

"One whole division on the Normandy sector was made up of men with stomach complaints; other units were refuges for men with lung or ear conditions. Most of the combat divisions had been reduced to eleven thousand men from the conventional 17,200 of the early campaigns," Overy said.

"To keep up numbers large contingents of volunteer battalions from the occupied part of the Soviet Union — Tatars, Cossacks, Georgians — were drafted in. By the time of the invasion the German 7th army deployed in Normandy had a sixth of its numbers recruited from such units."

Sir Max Hastings, who has written extensively about WWII, testifies: "the perpetual bleeding of manpower from west to east had crippled every division.

"The bulk of the [German] army was made up of the over-age and medically unfit convalescents from the east, and an entirely unreliable rabble of Polish, Russian and Italian defectors and forced laborers."

Yet, "it remains astounding," Sir Max Hastings said, "that Germany could still produce and equip and army in the west capable of causing the gravest difficulties to the best that Britain and America could throw into the war".

The timeline of the two parallel operations is quite illuminating.

The Allies landed in Normandy on 6 June 1944, the Russians started operation Bagration on 23 June.

Within two weeks the Army Group Centre, in the words of Chief of General Staff colonel-general Heinz Guderian, "has now ceased to exist."

By 25 July, the first Russian units were approaching Warsaw. That same day the Western Allies managed to break out of the Normandy beach-head.

#DDay "When you go home, Tell Them of us & say, For your tomorrow we gave our today" Their sacrifice never forgotten pic.twitter.com/3Zy0oKi6rJ

After Operation Bagration, said Professor Wawro, the Russians "are at the very gates of Berlin while we're still slogging our way through Normandy and towards Paris."

Professor Overy believes "Stalin must have gained a special satisfaction from the fact that while the Red Army had swept everything before it in two weeks, the Western Allies remained mired in a narrow bridgehead."

So astounding was the success of Operation Bagration that Stalin pondered the possibility for the Soviet Union to finish off Nazi Germany all by itself.

"In the Soviet Union the constant disappointments about the second front had produced a widespread cynicism about Western intentions," said Professor Overy.

"The tone was set by Stalin himself, who on the very eve of Overlord still doubted Western resolve: 'What if they meet up with some Germans! Maybe there won't be a landing then, but just promises as usual.' "

Operation Bagration: Soviet Summer Offensive of 1944
Well, the Second Front did open on 6 June 1944, and the next day the Pravda newspaper carried news of Operation Overlord across four columns with a photo of General Eisenhower. With the start of Operation Bagration, the focus of Russian media naturally switched to the heroic exploits of the Red Army.

As a culmination of wartime cooperation among the Allies, D-Day was long and arduous in the making, but brought a promise of a more joined and secure world once the Nazi threat was eliminated.

Alas, it was also the start of a slide towards the Cold War confrontation, slow at first but accelerating with every step of the allied armies towards Berlin.