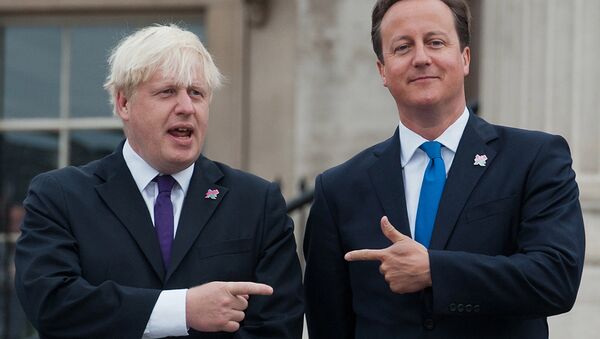 The civil war inside the UK Conservative Party has deepened with senior figures launching a series of attacks at one another as Brexit campaigning continues. The infighting comes as a new poll suggests support for leaving the EU is surging among the British public.

With two and a half weeks until the June 23 referendum, officials from the Leave and Remain camps have ramped up their attacks on one another, with Prime Minister David Cameron slammed over his decision to share a platform with opposition and left-wing parties — Labour, the Liberal-Democrats and the Greens — in campaigning to remain in the EU.

It's becoming increasingly clear the Leave campaign don't have a plan and are prepared to take a leap in the dark. We're #StrongerIn the EU.

Euroskeptic MP and fellow Conservative Andrew Rosindell said Cameron's actions were a "slap in the face" to party members.

It would be rather ironic if #StrongerIn campaign is rescued by Trade Unions that David Cameron is undertaking to emasculate. #Brexit

"It's crass, disappointing and it's a slap in the face to all of us who worked so hard to stop the left-wing parties win a majority in the election last year," Rosindell told the Telegraph.

"I think it smacks of desperation that he's willing to share platforms with people who have far left opinions, way beyond what the Conservative party has ever endorsed."

Cameron himself however, wasn't lying down though, releasing a joint-statement with the other party leaders accusing senior Leave officials Boris Johnson and Michael Gove of being "reckless and undemocratic" by failing to outline an economic plan if Britain leaves the EU.

Cameron: Vote Leave are being undemocratic and reckless #StrongerIn pic.twitter.com/doG87mTfNa

​"They are perpetuating an economic con‐trick on the British people, and we're calling time on it," the joint statement read.

'Court Jester' and a 'Vengeful Man'

"On the subject that they have veered towards, having lost the economic argument, of immigration, I think their campaign is verging on the squalid," he told the BBC.

I hope Johnson is squirming as he should be listening to John Major. Squalid. Deceitful. Misleading. Dishonest. #Marr

While Johnson himself warned that there has been "too much of this blue on blue action" in regards to attacks within the Conservative Party, fellow Euroskeptic Jacob Rees-Mogg launched a scathing attack on Sir John for his comments.

"What we've had today are the bitter ramblings of a vengeful man. I'm going to sling the mud straight back at Sir John Major, a knight of the garter who ought to know how to behave better. It's all to do with his bitterness over his failings that came from the Exchange Rate Mechanism that tarnished his whole prime ministership," he told BBC Radio 4.

The bitter fallout within the Conservative Party comes as two new polls suggest support for leaving the EU is rising.

A YouGov poll showed the Leave campaign leading with 45 percent, ahead of Remain on 41 percent, while there were 14 percent of respondents who were undecided.

The YouGov Brexit polls over the last years. A majority is now in favour of leaving.https://t.co/FfFrBbnzWi pic.twitter.com/vxCjEPftEK

Meanwhile, a separate TNS survey found the Leave vote ahead of remain by 43 percent to 41 percent.