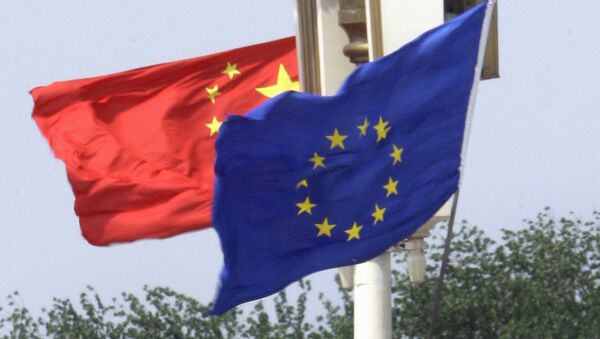 © AP Photo / Andy Wong
Subscribe
International
India
Africa
Chinese state-owned corporations and private firms have been on a multi-billion dollar shopping spree in Europe as part of Beijing's massive initiative aimed at building an economic "silk road" linking Asia and Europe that comes at a time when China's relations with the US are increasingly strained.

China's 'Suez Canal': Beijing Wants to Build 'Golden Waterway' in Asia
True numerous projects that are part of the so-called One Belt, One Road development strategy will be carried out in Central Asia and the Middle East, but Europe, as expert on energy geopolitics Keith Johnson recently put it, is "the ultimate prize in the Silk Road plan."

Figures back this view.

China Spends $1 Trillion on ‘New Silk Road’ to Surpass US on World Stage
In 2015, Fosun International Ltd. Bought French holiday company Club Med, while Synutra International Inc. invested 100 million euros to make dairy products at a new factory in the French region of Brittany. The list can go on.

Last year, China invested a total of $23 billion in all EU countries. There is also a $43 billion deal that will see China National Chemical Corp., also known as ChemChina, acquire Swiss agrochemical and seed supplier Syngenta AG. Compare this to the $15 billion Chinese companies brought to the US in 2015.

"Relations between China and the US are developing in terms of competition and distrust, rather than cooperation. This is one of the reasons behind China's interest in Europe," Le Corre, a visiting fellow in the Center on the United States and Europe at Brookings, observed.

This interest is long-term. Take China's other major initiative – the Asian Infrastructure Investment Bank (AIIB). Germany, France and the UK are members of the new development bank despite Washington's repeated calls not to join.

Despite these efforts, China's investment charm offensive on Europe has not been a walk in the park. Last month, the European Parliament refused to grant the Asian giant the long-coveted status of market economy status in the World Trade Organization despite Beijing's extensive lobbying.