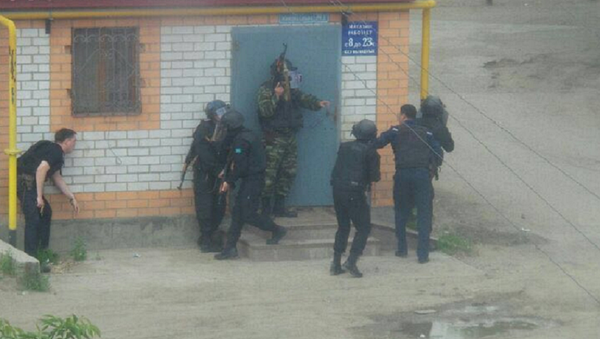 Following the attacks on arms shops and a military unit in the Kazakh northern city of Aktobe the police killed four criminals and detained seven others during an anti-terrorist operation, the spokesman for Kazakh Interior Ministry Almas Sadubayev said Sunday.

ASTANA (Sputnik) —Sadubayev said that law enforcement services are currently working on tracking and detaining the rest of the attackers.

"During the anti-terrorist operation in Aktobe four criminals were killed and seven others were detained, including two injured. A set of operational and investigative measures to detain the rest of criminals is underway," Sadubayev told RIA Novosti.

Earlier in the day, a group of criminals attacked Pallada arms shop in Aktobe and killed a salesman and a security guard and injured three police officers. During the attack on Panther arms shop the criminals killed one customer and injured another one. The policemen, who arrived at the scene of events, killed three criminals and detained one.

Gunmen Kill, Wound Civilians in a Shooting Spree in Kazakhstan
According to Sadubayev, during the attack on the military unit, the criminals killed three servicemen and injured six others. The criminals used a captured shuttle bus to enter the unit.

"The guard on duty used the weapon and foiled the criminals' attempt to further penetrate into the unit's territory. With the help of the police one criminal was killed and another one was wounded and detained," Sadubayev said.

Earlier in the day, Sadubayev said that the attackers allegedly were radical followers of non-conventional religious movements.