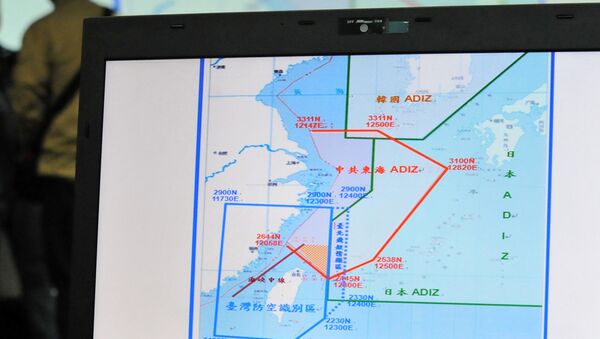 © AFP 2021 / Mandy CHENG
Subscribe
Beijing responded to the call of the United States Secretary of State, John Kerry, to restrict the creation of a national air defense zone in the South China Sea by urging the US and Japan to stop making baseless accusations against China.

Beijing Beware: Winner of US Elections Will Try to Change China's Politics
“We do not create problems, but are not afraid of trouble,” the deputy head of the General Staff of the People's Liberation Army of China, Sun Jianguo, was reported by Reuters as saying.

On Sunday, Kerry, during his visit to Mongolia, urged China “not to take unilateral action (air-defense deployment in the South China Sea) which is provocative.”

However, the Chinese foreign ministry on Saturday urged the United States and Japan to stop blaming China regarding the South China Sea.

“Countries from outside should honor their commitments and not make irresponsible remarks on issues involving territorial sovereignty,” Foreign Ministry spokesperson Hua Chunying said in Beijing in response to remarks by US Defense Secretary Ashton Carter and his Japanese counterpart Gen Nakatani at a security summit in Singapore.

Reportedly during the Shangri-La Dialogue on Saturday, Carter and Nakatani talked about the South China Sea issue and blamed China for the dispute.

“China will not bear the consequences, nor will it allow any infringement on its sovereignty and security interest, or stay indifferent to some countries creating chaos in the South China Sea.”

According to Hua, the defense secretaries blamed China for regional security issues when China is the victim in this situation.

My Way or Highway: Beijing Issues Four ‘Bottom Lines’ on South China Sea
Despite repeated statements of concern from countries such as Japan, India, Vietnam and South Korea, the Chinese spokesperson rejected the prospect of isolation, saying that many of the Asian countries at the gathering were ‘warmer’ and ‘friendlier’ to China than a year ago.

Talking about the South China Sea, the spokesperson mentioned the following important points regarding China’s sovereignty over the disputed islands.

“China has indisputable sovereignty over the Nansha Islands and the adjacent waters, which is fully backed by historical and legal evidence,” online publication China Daily reported.

The relevant construction which took place on China’s own territory violated no international law. “It is the intention of some countries that have deployed large amounts of advanced weapons and equipment to the Asia-Pacific region that should cause alarm among regional countries,” the publication noted.

Another point to note according to Hua is that the South China Sea arbitration case one-sidedly commenced by the Philippines is not meant to resolve disputes, but to refute China's territorial right and maritime rights and interests in the South China Sea.

“China upholds a common, comprehensive, cooperative and sustainable security outlook for the region and believes that regional countries shall work together to build and share a path of regional security that benefits all,” China Daily reported Hua as saying.

Ingimundar
5 June 2016, 21:37 GMT2
000000
ASEAN was having peace for more than 50 yrs until the unwanted self proclaimed policeman decides to step in, uninvited. Trying to sell snake oil? USA FORGOT ITS DEFEAT IN VIETNAM. Vietnam grew up with USA as it's bitter enemy. Obama was peddling arms to Vietnam. Big discount? Like the one promised to Pakistan? But was withdrawn at the last minute ! Now should Vietnam trust USA? Vietnam shall buy only the most advanced weapons for reverse engineering, ok? You no like the deal? Fikki. Fikki.
copius
5 June 2016, 21:44 GMT5
000000
Newsfeed
0
New firstOld first
loader
LIVE
Заголовок открываемого материала
Access to the chat has been blocked for violating the rules . You will be able to participate again through:∞. If you do not agree with the blocking, please use the feedback form
The discussion is closed. You can participate in the discussion within 24 hours after the publication of the article.
To participate in the discussion
log in or register
loader
Chats
Заголовок открываемого материала
Worldwide
InternationalEnglishEnglishMundoEspañolSpanish
Europe
DeutschlandDeutschGermanFranceFrançaisFrenchΕλλάδαΕλληνικάGreekItaliaItalianoItalianČeská republikaČeštinaCzechPolskaPolskiPolishСрбиjаСрпскиSerbianLatvijaLatviešuLatvianLietuvaLietuviųLithuanianMoldovaMoldoveneascăMoldavianБеларусьБеларускiBelarusian
Transcaucasia
ԱրմենիաՀայերենArmenianАҧсныАҧсышәалаAbkhazХуссар ИрыстонИронауОssetianსაქართველოქართულიGeorgianAzərbaycanАzərbaycancaAzerbaijani
Middle East
Sputnik عربيArabicArabicTürkiyeTürkçeTurkishSputnik ایرانPersianPersianSputnik افغانستانDariDari
Central Asia
ҚазақстанҚазақ тіліKazakhКыргызстанКыргызчаKyrgyzOʻzbekistonЎзбекчаUzbekТоҷикистонТоҷикӣTajik
East & Southeast Asia
Việt NamTiếng ViệtVietnamese日本日本語Japanese中国中文Chinese
South America
BrasilPortuguêsPortuguese
NewsfeedBreaking
05:28 GMT'People's Republic of Comedy': Lithuanian MP Blasts China Amid Taiwan Spat
04:01 GMTTwitter Admits to Erroneously Suspending Accounts Amid a Slew of 'Coordinated and Malicious' Reports
03:41 GMTWorld Must Not Blame Africa for Undervaccination While Denying Continent Shots - Expert
03:32 GMTUS Intel Accuses Russia of Planning 'Multi-Front Offensive' Against Ukraine as Early as 2022
03:30 GMTMeet Mehmet: Dr. Oz Vying for US Senate in Pennsylvania After Trump-Endorsed Candidate Drops Out
01:45 GMTIsraeli ‘Pegasus’ Spyware Used to Hack Phones of 11 US Diplomats - Reports
01:35 GMTColorado Store Shooting Suspect Found Incompetent to Stand Trial - Reports
00:59 GMTAstronomers Spot Ultra-Dense Exoplanet Seemingly Made of Solid Iron Orbiting Nearby Star
00:41 GMTMillions Remain Long-Term Unemployed Despite Big Decline in November US Jobless Rate
00:30 GMTA Failed Biennial World Cup Could Lead to New Global Tournament
YesterdayJan. 6 Panel Postpones Jeffrey Clark Deposition Over Medical Condition
YesterdayExplosive & Nearing Dominance: What the Data Out of South Africa is Telling Us About Omicron
YesterdayOklahoma Suing Biden Admin to Exempt National Guard From Pentagon's COVID-19 Vaccine Mandate
YesterdayUS States of Maryland, Pennsylvania Confirm First Omicron Variant Cases - Statements
YesterdayGroup-IB Founder's Case Linked to Leakage of Data From Alleged GRU Hackers - Reports
YesterdayArmed Man Arrested Outside UN Charged With Making Terroristic Threat - NYPD
YesterdayMacron Postures as Peacemaker Between Lebanon, Gulf Nations After Selling UAE Fighter Jets
YesterdayUS Ends Vienna Talks, Says Iran Not 'Serious' About Meeting JCPOA Compliance Standards
YesterdayDeSantis' Idea to Create Civilian Militia He Would Control Triggers 'Gestapo' Associations Online
YesterdayVast Amounts of Explosives, Munitions Reportedly Stolen From, Lost by US Military