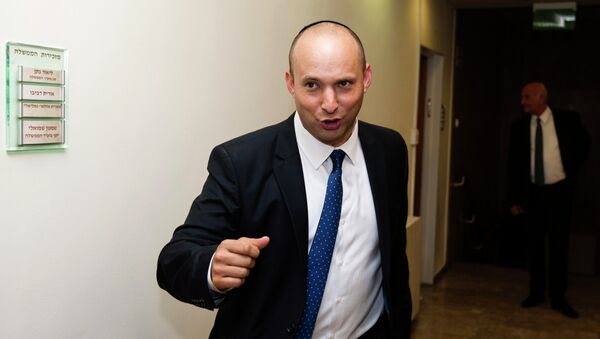 In case of the Palestinian state creation, one of the Benjamin Netanyahu's coalition partners promised to leave the government.

The Jewish Home party leader's Naftali Bennett announcement came as a response to Netanyahu's Tuesday statement that Israel is ready to discuss the Arab Peace Initiative to reach a settlement of the conflict with Palestine which involves the 'two-state solution.'

"While we're here, there will be no Palestinian state on the highway number 6. We will become a wall against the historical mistakes. If it comes to the 1967 borders and the division of Jerusalem, we will not only leave the government, but will collapsed it," Bennett said in the interview with the Israel's Arutz 2 TV channel.

Arab States to Represent Ramallah at Israel-Palestine Talks
The Jewish Home party has eight parliament representatives and their walkout from the government would deprive Netanyahu from the parliamentary majority support. The party is lobbying for the interests of half a million Israeli settlers living in the occupied territories of the West Bank and East Jerusalem. Bennett has served as Israel's Minister of Education since 2015 and Minister of Diaspora Affairs since 2013.

The proposal which Netanyahu on Tuesday agreed to discuss is aimed at ending the Arab–Israeli conflict and was adopted by the Arab League in 2002. On Monday, Netanyahu told the Israeli parliament that the Arab Peace Initiative has positive elements that can revive constructive negotiations with the Palestinians.