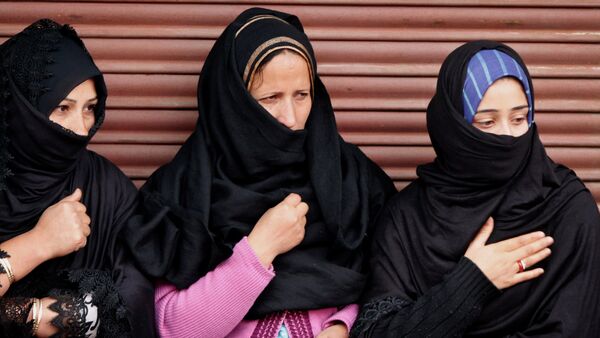 © AP Photo / Mukhtar Khan
Subscribe
There has been a slow and steady rise of what has become known as Islamic feminism in India. Their latest nationwide protest to abolish the triple ‘talaq’ Islamic divorce has yet again underscored their presence.

More than 50,000 Muslim women have signed a petition to the Indian government asking the administration to do away with the unilateral divorce method. Through this way, a wife can be divorced by her husband by merely uttering the word ‘talaq’ three times.

The campaign was led by the women’s movement Bharatiya Muslim Mahila Andolan. Its co-founder Noorjehan Saifa Niaz spoke exclusively to Sputnik news agency about the organization’s latest protest and other demands.

Niaz said that, “The Muslim family law in India is not codified. As a result, we have a very different method of divorce for Muslim women. The men just say ‘talaq, talaq, talaq’ and the divorce becomes a legal reality.”

“Of late, we also see that men are sending divorce on sms, WhatsApp, and also through phone calls. And, this kind of divorces also has the support from Islamic religious leaders and groups. They sanction it as part of the Shariah law, which becomes the religious backing.”

Questioned further why the triple talaq method is prevalent though it is not sanctioned by in the Quran, she said: “It’s prevalent only in India. In other Islamic countries like Pakistan and Bangladesh, it has been abolished.”

“We want a reformed codified law for Muslim women as of now.”

• In the case of divorce, the settlement should be the amount of the husband’s annual income. Right now, it is totally arbitrary and is at the mercy of husband. He can pay as much as he wants to his divorced wife. It can be as little as 500 Rupees or 700 Rupees. So, the minimum amount should be fixed. It should not be left to the whims and fancies of the husbands.

• Polygamy should be abolished. Muslim men should not be allowed to get married to other women while his first marriage is still valid.

• Unilateral divorce has to go and so should temporary marriages.

“All these family matters need to put down on paper and passed by the parliament. This is our long-term demand but this will take a long time and needs an overhaul. Our immediate request is to formally end the triple talaq system.”

Though the women’s group has been demanding the abolition of the triple talaq system for several years, its signature campaign started only a few months ago but has  quickly gained momentum. A survey conducted by them indicates up to 92% of Muslims women want the system to be eradicated.

Niaz went on to say: “Lots of Muslim women are calling us up and reporting that their husbands have divorced them via this method. In terms of their legal status, the women’s status is very difficult and pathetic. There has been no maintenance money and no arrangement for the children. They’re literally on the roads and at the mercy of others. So, we ought to have a strict law which prohibits unilateral divorce. There needs to be a process or arbitration.”

She continued it is only the Islamic clerics who are opposed to any changes in the system but not ordinary Muslim men. The Bharatiya Muslim Mahila Andolan is also planning to fight this issue legally by filing a legal petition with the Supreme Court shortly.

000000
Newsfeed
0
New firstOld first
loader
LIVE
Заголовок открываемого материала
Access to the chat has been blocked for violating the rules . You will be able to participate again through:∞. If you do not agree with the blocking, please use the feedback form
The discussion is closed. You can participate in the discussion within 24 hours after the publication of the article.
To participate in the discussion
log in or register
loader
Chats
Заголовок открываемого материала
Worldwide
InternationalEnglishEnglishMundoEspañolSpanish
Europe
DeutschlandDeutschGermanFranceFrançaisFrenchΕλλάδαΕλληνικάGreekItaliaItalianoItalianČeská republikaČeštinaCzechPolskaPolskiPolishСрбиjаСрпскиSerbianLatvijaLatviešuLatvianLietuvaLietuviųLithuanianMoldovaMoldoveneascăMoldavianБеларусьБеларускiBelarusian
Transcaucasia
ԱրմենիաՀայերենArmenianАҧсныАҧсышәалаAbkhazХуссар ИрыстонИронауОssetianსაქართველოქართულიGeorgianAzərbaycanАzərbaycancaAzerbaijani
Middle East
Sputnik عربيArabicArabicTürkiyeTürkçeTurkishSputnik ایرانPersianPersianSputnik افغانستانDariDari
Central Asia
ҚазақстанҚазақ тіліKazakhКыргызстанКыргызчаKyrgyzOʻzbekistonЎзбекчаUzbekТоҷикистонТоҷикӣTajik
East & Southeast Asia
Việt NamTiếng ViệtVietnamese日本日本語Japanese中国中文Chinese
South America
BrasilPortuguêsPortuguese
NewsfeedBreaking
YesterdayAbbott Says Texas Is Ready For Possible Cold Winter Due to ‘Dozen Laws’ Signed
YesterdayBarnier Says France Has to 'Be Ruthless With the British' Amid Migrant Crisis - Report
YesterdayEx-Labour Leader Corbyn Slams 'Irrational' Suspension From Party One Year On
YesterdaySudanese Army Repels Attack by Ethiopian Troops With Casualties on Both Sides
YesterdayWHO Says No Need for Panic Over Omicron Coronavirus Strain as Much Remains Unknown
YesterdayBiden's First Christmas Tree Will Reportedly Cost Taxpayers $139,000
YesterdayMemes Flood Twitter After WHO Dubs New Covid Strain Omicron
YesterdayOmicron Coronavirus Strain May Already Be in US, Going to Spread 'All Over', Fauci Says
YesterdayNCT 2021 Walks Into a Dream in New Teaser Video 'Year Dream: Stage 2 - Surfing in Our Dreams'
YesterdayWHO Confirms Some Guesses on Why It Skipped Two Letters and Named New COVID Variant 'Omicron'
YesterdayFrance Mulls Autonomy for Caribbean 'Confetti of Empire' Amid COVID-19 Rule Protests
YesterdaySolomon Islands Gripped by Anti-China Protests as US Keeps Largely Mum
YesterdayRussia is Not Going to Attack Anyone, Ambassador to US Says
YesterdayWhy Washington's 'Russian Invasion' Scare is Cover for Kiev's New Offensive Against Donbass
YesterdayActor Seth Rogen Mocked Online For Downplaying Crime in Los Angeles
YesterdayUK PM Orders Travel Quarantine and Mask-Wearing to Combat COVID-19 Omicron Variant
YesterdayBiden Reminded of Attack on Trump for African Travel Ban He Now Emulates
YesterdayGamaleya Center Says COVID-19 Antibody Drug Will Not Be Available Earlier Than Late 2022
YesterdayRussian Anti-Satellite Weapon Test Makes European Solar Probe's Planetary Flyby More Risky, ESA Says
YesterdayMedia Reveals Contents of Safe Holding Secret Documents of UK Royal Family