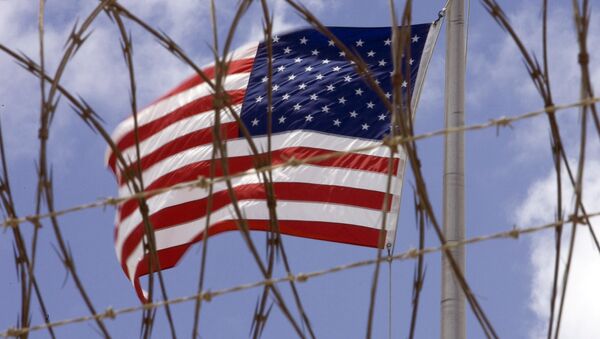 © AFP 2023 / Files / Paul J. RICHARDS
Subscribe
International
India
Africa
US prosecutor Ed Ryan called that the letter in question written by Khalid Shaikh Mohammad, the alleged planner of the September 11, 2001 terrorist attacks, as a 19-page long "insult" to the US president and "a sort of stream of consciousness" of Mohammad’s worldview.

Families of 9/11 Victims See Progress in US Trial of Plotters of Attacks
GUANTANAMO BAY NAVAL BASE (Sputnik), Joanne Stocker — A letter written by Khalid Shaikh Mohammad, the alleged planner of the September 11, 2001 terrorist attacks, to US President Barack Obama is propaganda and should not be delivered to the president, prosecutor Ed Ryan told a military court at Guantanamo Bay, Cuba on Thursday.

Earlier, Mohammad’s lawyer David Nevin told Judge James Pohl that his client has the legal right to send the letter, and it should not matter if anyone else thinks it is propaganda.

"[Defense] counsel says we don’t have to get into propaganda, but I do label it [the letter] as propaganda," Ryan stated. "This man [Khalid Shaikh Mohammad] does not have a right to write a letter to the president."

Ryan described the letter in question as a 19-page long "insult" to the US president and "a sort of stream of consciousness" of Mohammad’s worldview.

Gitmo Military Court Needs to Probe if CIA Spies on Attorney-Client Talks
The US government has previously prevented Mohammad from sending information about Islam from the detention facility.

Furthermore, Ryan stated that the Joint Task Force at Guantanamo Bay has the responsibility to control "what comes out from that man [Mohammad] to the rest of the world."

However, Mohammad’s attorneys maintain that US law permits the letter to be sent as a redress of grievances Mohammad has against the US government.

Nevin explained that the US Supreme Court has upheld the right of prisoners to send letters to government officials "without limitations to pages or content."

The letter is not intended to be disseminated to the media or the public, Nevin added.