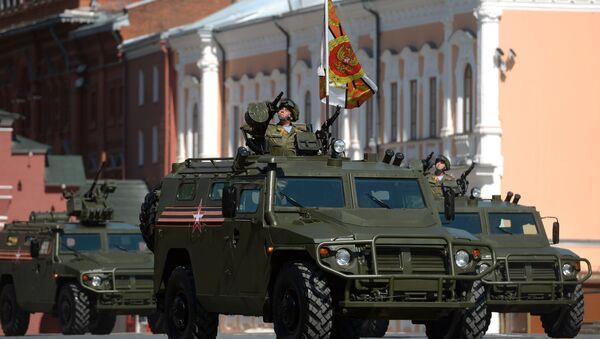 Russia's Military Industrial Company, the producer of the GAZ-2330 Tigr all-terrain infantry mobility vehicle, has announced that it will no longer be using the US-made Cummins diesel engine, previously installed on some versions of its vehicles, switching to a domestic engine manufacturer instead.

"This is part of a consistent policy, and the decision to switch over to domestic engines was made a long time ago," the official explained.

Moreover, he added, "today, the Yaroslavl engine plant," providing the new engines, "is the most modern in Europe, its engines used by companies including Mercedes Benz."

"When accounting for sanctions, and for differences in the exchange rate, the need for a complete transition to domestic engines was obvious," the company director said.

Russia Ready to Export Transport Equipment, Off-Road Vehicles to Zimbabwe
At the same time, according to Krasovitsky, in addition to getting a new generation of Yaroslavl-built engines, the Tigr will also receive a number of other improvements, related for the most part to mine and anti-ballistics protection.

"Our equipment is in demand," he said. "In 2015, we closed out the state order on time and without any penalties. Growth in production amounts to between 20 to 25 percent per year, which allows us to expand our capacity and to hire new workers."

The Gaz-2330 Tigr is a family of Russian off-road vehicles, developed in the early 2000s and produced beginning in 2004 at the Arzamas Machine-Building Plant, part of the Military Industrial Company. The vehicle is produced in a variety of configurations, and is available for both civilian and military use. The vehicle has also been successfully exported to the countries across the former Soviet Union, China, Mongolia, and several states in Africa, Latin America, and the Middle East.