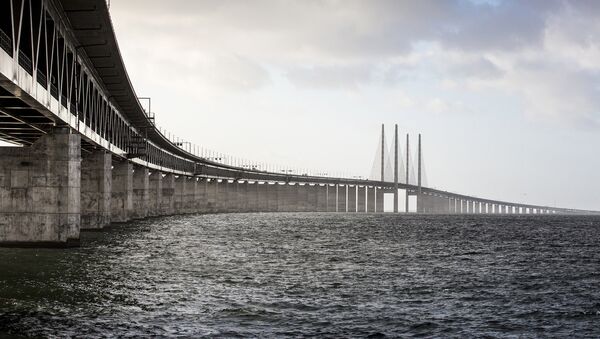 © Flickr / News Oresund
Subscribe
Still distressed by the aftershocks of last year's unprecedented refugee influx, Sweden decided to extend its border controls until November 2016 in an effort to keep the number of asylum applications down from 163,000. This measure, however, may prove a disastrous blow for the whole transnational Øresund Region.

Tip of the Iceberg: Segregated Swimming Hours All the Rage in Sweden
The controls were first introduced in November 2015 and are now expected to run until at least November. Sweden's southern neighbor Denmark has opted to extend its own controls likewise.

The number of people seeking asylum in Sweden has reportedly dropped significantly since the border controls and ID checks were introduced. At present, Sweden takes in an average of under 500 asylum seekers a week, as opposed to almost 10,000 a week during the most hectic months of last autumn.

Nevertheless, border controls may not be a panacea, as a group asylum seekers were in May reported to have successfully crossed the Øresund bridge on foot for the first time. According to the local police, the number of unreported cases may well be higher.

Paperwork Problems: Sweden Still Struggling With Jobless Migrants
Besides, the controls are highly unpopular with many residents of the border region, as regular commuters between Denmark's Copenhagen and Sweden's Malmö have seen their journey protracted by around 40 minutes.

Southern Swedish Chamber of Commerce CEO Stephan Müchler, a consistent opponent of the border controls claimed that people were leaving their jobs out of frustration over the changes to their daily commuting schedule.

"It's a sad blow to the region. We know that the controls cost around one million kronor ($120,353) per day. Besides, they also hurt integration," Southern Swedish Chamber of Commerce CEO Stephan Müchler said as quoted by Vestmanlands Läns Tidning.

Refugee Father of 20 Tempted by Sweden's Tantalizing Entitlements
"I think this is horrible. I do not know what hard working people should do to make ends meet. Now we see single mothers being forced to resign. <…> I think it is terribly arrogant towards the ordinary people who are just trying to have a job!" commuter Marie Irgens Jacobsen told SVT.

The Øresund Region is a transnational metropolitan area, centered around the Øresund strait and the two cities on its either side, Copenhagen and Malmö. The Danish region of Zealand is connected to the Swedish region of Scania by the Øresund Bridge. The region has a population of almost four million and is one of Scandinavia's most densely populated areas.

Owing to the Nordic Passport Union, the Scandinavian countries have enjoyed over a half a century of visa-free travel since the 1950s. However, the idyll came to an abrupt end in November 2015, when border controls were first introduced.

000000
Popular comments
Is SN trying to tell us that Sweden and Denmark must let their border opens so that the rape rates gets higher and so that local boys and men can not enjoy a bath with their female friends and partners ?
Marques rouges
2 June 2016, 12:21 GMT1
000000
Marques rouges, somehow remembering the structure of school classes back in the early 60's in Iceland, a Christian Lutherian country, it was quite ordinary to have the youth genders separated, both in swimming lessons and In school classes. Those were the days.
ptcjm
2 June 2016, 12:34 GMT1
000000
Newsfeed
0
New firstOld first
loader
LIVE
Заголовок открываемого материала
Access to the chat has been blocked for violating the rules . You will be able to participate again through:∞. If you do not agree with the blocking, please use the feedback form
The discussion is closed. You can participate in the discussion within 24 hours after the publication of the article.
To participate in the discussion
log in or register
loader
Chats
Заголовок открываемого материала
Worldwide
InternationalEnglishEnglishMundoEspañolSpanish
Europe
DeutschlandDeutschGermanFranceFrançaisFrenchΕλλάδαΕλληνικάGreekItaliaItalianoItalianČeská republikaČeštinaCzechPolskaPolskiPolishСрбиjаСрпскиSerbianLatvijaLatviešuLatvianLietuvaLietuviųLithuanianMoldovaMoldoveneascăMoldavianБеларусьБеларускiBelarusian
Transcaucasia
ԱրմենիաՀայերենArmenianАҧсныАҧсышәалаAbkhazХуссар ИрыстонИронауОssetianსაქართველოქართულიGeorgianAzərbaycanАzərbaycancaAzerbaijani
Middle East
Sputnik عربيArabicArabicTürkiyeTürkçeTurkishSputnik ایرانPersianPersianSputnik افغانستانDariDari
Central Asia
ҚазақстанҚазақ тіліKazakhКыргызстанКыргызчаKyrgyzOʻzbekistonЎзбекчаUzbekТоҷикистонТоҷикӣTajik
East & Southeast Asia
Việt NamTiếng ViệtVietnamese日本日本語Japanese俄罗斯卫星通讯社中文（简体）Chinese (simplified)俄罗斯卫星通讯社中文（繁体）Chinese (traditional)
South America
BrasilPortuguêsPortuguese
NewsfeedBreaking
YesterdaySeoul Calls on Pyongyang to Restore Communication Lines Ahead of Possible Talks
YesterdayEuropean Commission Vice President Congratulates SPD With Strong Social Democratic Result
YesterdayAlternative for Germany to Continue Supporting Nord Stream 2 After Election - Co-Chairman
YesterdayMilitants in Aleppo Tried to Force Way From Turkish-Controlled Area - Russian Military
YesterdayGermans See No Use to Vote for CDU Without Merkel at Helm - Afd Politician
YesterdayGerman Conservatives Suffer Catastrophic Defeat in General Election – Senior Official
YesterdayGermany's FDP Leader Hints at Coalition Talks With Greens
YesterdayMacron Files Complaint Against Paparazzi for Invasion of Privacy - Reports
YesterdayTwitter Removes Blue Verified Badge From Accounts of Several Afghan Ministries - Reports
YesterdayLaschet, Scholz Want Coalition Talks to End by Christmas
YesterdayCIA Was Ready to Start Firefight in London to Prevent Russia From Busting Out Assange, Media Claims
YesterdaySuicide Pact? Top Labour Remainer Says Party Should Campaign to Rejoin EU
YesterdayVideo: Miss France 2019 Confronted by 'Teenage Gang' That Threw Stones at Her in Paris
YesterdayFree For All! Enraged Moped Drivers Fight in London Amid Lack of Fuel - Video
YesterdayPSG's Kylian Mbappe Caught on Camera 'Lamenting Neymar Would Not Give Him Passes'
YesterdayPowerful 5.7-Magnitude Earthquake Hits Philippines' Largest Island Luzon
YesterdayInfrastructure Plan: Pelosi Says She 'Never' Brings a Bill to Floor 'That Doesn't Have the Votes'
YesterdayUsyk vs. Fury? Gypsy King's Twitter Like Leaves Fans Buzzing About Possible Heavyweight Clash
YesterdayLabour Leader Demands Visas For 100K Foreign Lorry Drivers Amid Global Shortage
YesterdayLabour Staff Cuts That Prompted Strike Ballot Due to £2m-a-Year Legal Costs