Scots Dump Donald: 'Scotland Against Trump' Launched Ahead of Visit 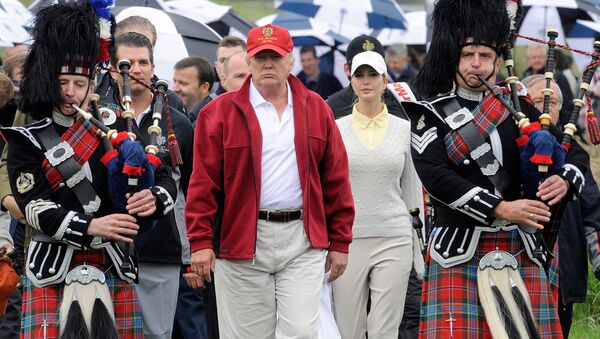 It's no secret that Donald Trump is not very well loved in Scotland. His controversial golf course developments and attempts to take legal action against the building of Scottish wind farms have angered many Scots, and his comments on the banning of Muslims from entering the United States were met with derision across the United Kingdom.

Earlier this year a petition attracted over 500,000 signatures leading to a debate in the House of Commons over whether the UK government should ban the Republican Party's presumptive nominee from entering the country.

Breaking: @Rise_Scotland say they are "occupying the Trump International Hotel in Aberdeenshire" in protest against its racist owner.

Since then protests have been held at Mr Trump's Scottish resorts, most recently in January over his comments that Muslims should be banned from entering the US.

Now ahead of Mr Trump's visit to attend the re-opening of his Turnberry Golf Course on the West coast of Scotland, a dedicated campaign has been set up with the aim of letting Mr Trump know exactly how people feel about his visit.

The newly formed Scotland Against Trump Facebook page is already rallying together protesters and organizations from all over the country to attend a demonstration at the reopening of Mr Trump's Turnberry Golf Resort, which the property tycoon will be attending later this month.

"The protests at Turnberry on the 24th of June will bring together many people who have one thing in common, and that is that Mr Trump's presence and views are not welcome in Scotland," Laura Waters, one of the organizers of the campaign told Sputnik News.

"He is potentially a very dangerous man and we will make it clear to the rest of the world that Scotland will not tolerate him."

Nicola Sturgeon, the First Minister of Scotland, has also made it clear that she will not be meeting with the property tycoon during his visit. These upcoming protests are just the latest in a series of events which caused Mr Trump to threaten to take his business away from Scotland and focus on developments in Ireland. In 2015 Donald Trump lost a legal challenge against the Scottish Government over the development of an off-shore wind farm within sight of his Menie golf resort.

Hello Ireland 🇮🇪 ☘: he — #Trump — was as crazy here (Scotland) as he looks like being with you. https://t.co/PeSlVTzEhN

In December of 2015 Robert Gordon University stripped Donald Trump of his honorary degree in response to racist comments he made during his presidential candidacy campaign.

In 2012 a campaigner mocked Donald Trump using a balloon and static energy to make his hair stand on end as he exited the Scottish Parliament.

I'd never seen this angle of Trump's ballooning in Scotland. The joy on the guy's face. (Getty / Jeff Mitchell) pic.twitter.com/gyvrlIVEvm

Yet Scotland could offer a safe haven to those looking for a new home in the event of Donald Trump winning the American Presidential race.