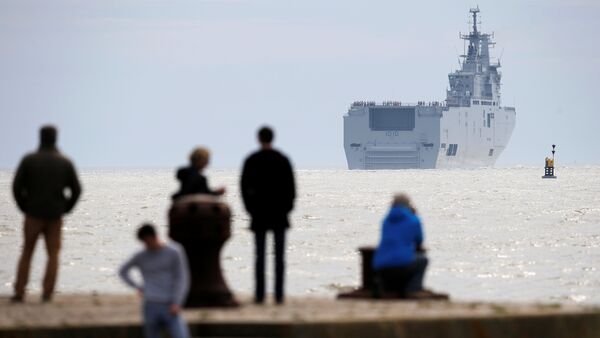 France to Hand Over First Mistral Warship to Egypt on June 2
PARIS (Sputnik) — In August 2015, Paris and Moscow formally terminated the 1.2-billion-euro (some $1.3 billion at current exchange rates) deal on the construction and delivery of two Mistral-class helicopter carriers. Shortly after, French President Francois Hollande confirmed that a deal had been reached with Egypt on the delivery of two Mistrals to the Arab country.

"The ceremony of the transfer of the vessel, as planned, was held today in Saint-Nazaire. We can say that the carrier has been officially handed over to Egypt, and it is at [Cairo's] disposal from today," the spokesperson said.

According to the spokesperson, the first Mistral warship handed over to Egypt, named after legendary Egyptian President Gamal Abdel Nasser, will leave Saint-Nazaire for Egypt the next week, with the Egyptian seamen on board.