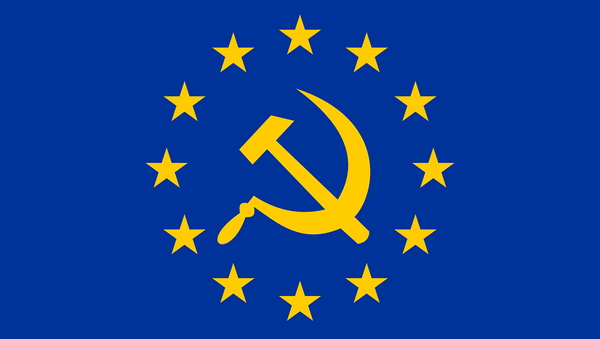 Recent YouGov polling shows that about a third of the citizens of France and Germany are in favor of their countries' exit from the EU, with 52% of Germans and less than half of the French saying they would vote to remain in the bloc if a referendum was held. What's behind Western Europeans' growing euroscepticism? Sputnik investigates.

Half of Germans Open to EU Exit, 2/3 for Ousting Merkel
The latest YouGov poll, conducted for the German media group Handelsblatt, found that 29% of Germans are in favor of leaving the supranational bloc. Across the Channel in Britain, meanwhile, where voters are set to go to the polls on June 23 for a vote of confidence referendum on the country's membership in the EU, YouGov found pro- and anti-EU sentiment to be in a dead heat at 41% apiece for the second week in a row.

Commenting on the growing euroscepticism inside the leading European countries, the independent Russian newspaper Svobodnaya Pressa recalled that while Britons' attitudes toward the EU "have always been a little 'foggy', Germany and France are the core of European integration – it's very foundation."

In this light, the paper noted, "the fact that almost a third of French and German citizens are now prepared to vote for EUexit is probably indicative of serious problems in the European Union. What went wrong? What is it that Europeans are not satisfied with within the supranational organization?"

Kamkin, a senior researcher at the Center for German Studies at the Institute of Europe under the Russian Academy of Sciences, indicated that the growth of euroscepticism is a trend that has been observed primarily over the last decade, despite the number of eurosceptics in these countries remaining in the single digits throughout the 1990s and 2000s.

UK’s Pro-, Anti-EU Membership Campaigns in Dead Heat at 41% Apiece
"Now, the situation is quite different, and we see this in the results of elections," the expert suggested. "One should not forget, for instance, that National Front leader Marine Le Pen is a consistent Eurosceptic; if she is not for withdrawal from the EU, she is, at the minimum, for the return of state sovereignty."

In Germany, meanwhile, "the Alternative for Germany party received up to 20% of the vote in local elections recently, and favors an even more radical position, including the rejection of the euro, and a sharp limitation of the powers of the Brussels bureaucracy."

Asked about the cause for Western Europeans' increasingly anti-EU attitudes, Kamkin noted that in his view, "dissatisfaction stems from the nontransparent and very complicated decision-making process of European institutions, from Brussels' economic dictate, in agriculture first and foremost – the quotas; this is, figuratively speaking, the [forced] monoculture of the agriculture of many European countries."

In many ways, the analyst suggested, "Brussels' economic policy is reminiscent of the Soviet planned economy, only in a capitalist wrapper. For this reason, some Eurosceptic politicians and journalists sometimes even call the European Union a 'foolish and twisted parody of the USSR.'"

EU Chief Slams 'Utopian' Europe Ideals as Cracks Appear in Core Principles
"To this must be added the very painful discussion surrounding the Transatlantic Trade and Investment Partnership (the TTIP) – a free trade zone between the US and the EU. Here, negotiations are conducted behind closed doors, and not even European politicians have access to the documents regulating this project. For example, when a group of lawmakers in the Bundestag recently asked to review the texts that Germany and the EU are signing on behalf of the European countries, they were denied, effectively told that 'it's none of your business' and that 'this is confidential information'."

In this sense, Kamkin said, "it's understandable that ordinary German and French citizens are very concerned about transgenic foods actively promoted by American corporations. They are worried about the increased competition with cheaper US manufacturers, especially in the agricultural sector. Plus there's the migration crisis, which, as we have seen, the EU has proven unable to resolve."

"And the Greek question, of course, also played a role when it comes to German and French attitudes," the analyst added, "since these countries are the main donors to the EU, and forced to rescue the sinking economies of Greece and other troubled countries. German finance officials themselves recognize that the Greeks falsified statistics prior to their entry into the euro area; still, from the perspective of the Brussels bureaucracy, there is no going back, and it's necessary to pull Greece along."

On the whole, the analyst warned, "the situation, I'll say again, is reminiscent of the final years of the Soviet Union."

German Left Party 'Bleeding' Support as Right Wing AfD Skyrockets
Back then too, he noted, "some republics were also clear donors, pulling others along on their coattails. And these disparities in the economic development of certain regions of the EU have manifested themselves. The problem is that a political decision was made by European bureaucrats to incorporate countries into the union which could not meet the criteria for economic and social development of countries like the Netherlands, France or Germany."

"If at first, in the 1960s and 1970s, the European Economic Community," the predecessor to today's EU, "really was a community and association of advanced economies, somewhere at the end of the 90s, with the incorporation of the countries of Eastern Europe, the bloc has increasingly become dominated by politics, rather than economic expediency. In the end, these disparities between political will and economic viability have led to many Europeans' frustration in the EU as a tool which had originally been designed, above all, to strengthen the competitive advantage of the European economy."

Asked to comment on the upcoming Brexit referendum, and whether it might result in a chain reaction of EUexit referendums, Kamkin emphasized that it's not worth exaggerating. "The UK, after all, has always held a semi-isolationist position with regard to European integration. This included the preservation of its national currency and the rejection of the Schengen area. In other words, Britain tried to take maximum advantage of EU membership, while taking up a minimum of obligations."

"Now, [many] Britons feel that the piggy bank of benefits has been exhausted, and that it's time to get off the sinking ship, so to speak. This is the position of Brexit supporters. But it's unlikely that the Brexit itself might influence the collapse of the EU. Rather, it can be assumed that if the migration crisis grows, if an agreement on Transatlantic partnership that is so obviously unfavorable to the European economy is signed, then, influenced by economic lobbies or governments, or by opposition parties, legal initiatives will be floated to withdraw from the EU…"

72 Points of Discord: Erdogan Ready to Flood Europe With Migrants
For his part, Maxim Bratersky, professor of international relations at Moscow's Higher School of Economics, recalled that while euroscepticism is not a new phenomenon, its recent manifestations have become a serious concern.

"The concept of 'Euroscepticism' did not appear yesterday. At the same time, it must be admitted that the EU has gone through a series of crises in recent years. This does not mean that it will fall apart tomorrow, but the EU has grown too rapidly and has absorbed too many disparate economies and cultures. It faces uneven levels of economic development, and a lack of a common fiscal policy, and there is much more that it lacks."

Crisis after crisis, most recently the one associated with Middle Eastern refugees and migrants, "cannot but help to irritate many Europeans," Bratersky noted. "But as far as the citizens of the leading EU countries – the Germans and the French, are concerned, there the situation is somewhat different," he added.

"I suspect that the Germans opposed to EU membership are unhappy with what they believe is the situation where 'Germany pays everyone else's debts'. For instance, the money sent to save the Greek economy came mostly from Germany. And many Germans may have already asked themselves the question: 'why should we hardworking people feed someone else out of our own pockets'?"

At the same time, the analyst suggested, "in general, the dissatisfaction of many Europeans can be explained by the fact that the European elite, the European bureaucracy has distanced itself from ordinary people. Brussels solves its own problems, while Europeans no longer feel that their opinion is always taken into account – no longer believe that EU policy is created based on the interests of its citizens."

Europe Backs Away from TTIP, UK Voters May Leave EU to Avoid US Trade Deal
"The latest example of that was the referendum in the Netherlands on the issue of Ukraine's EU association. The Dutch people said 'no', but the European bureaucracy immediately moved to wash the matter at the bureaucratic level and to push the decision ahead as planned anyway. It was the same story with the adoption of a European Constitution. The majority of Europeans did not vote for it, but the Brussels bureaucracy still found a way to push through the principles via agreements."

Finally, asked whether these issues were an indication of the need for serious reforms, Bratersky suggested that unfortunately, the leaders don't exist who might be capable of doing so. "Where are the modern-day Charles de Gaulles, the modern-day Helmut Kohls? What's necessary is politicians of this magnitude…Angela Merkel, in her own right, is of course a talented person. But she's not on par with such leaders."

In fact, the analyst suggested, almost the entirety of the European leadership consists of "absolutely greyish bureaucrats; if you ask a German in the street the name of the head of the European Commission, it's unlikely that you'll get an answer. Officials in Brussels are changed like gloves; nobody knows who they are."