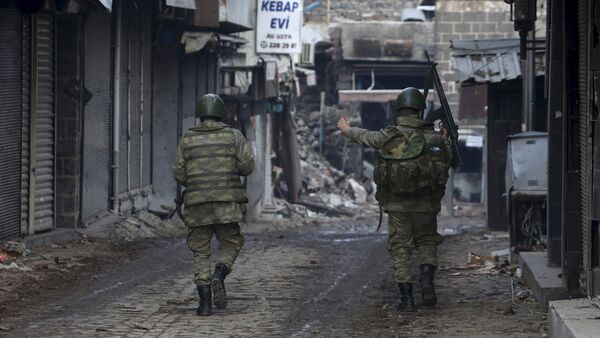 Sevim Dagdelen, a Bundestag member from the Left party, said that Germany should stop sell arms to Turkey because of the crimes committed by Turkey against ethnic minorities.

MOSCOW (Sputnik) — Germany should stop ignoring the crimes committed by Turkey against ethnic minorities and end its military support amid Ankara's attacks on Kurds, a German lawmaker said Thursday.

Germany Recognizes Need to Keep Memory of Armenia Genocide Alive
Sevim Dagdelen commented on the German parliament Bundestag’s decision to pass a resolution today labelling the killing of Armenians during and after World War I as genocide. The document said the German Empire, Turkey’s key ally at that time, chose to close eyes to this crime.

"We here in Germany…must go still farther. Because the concrete politics have not drawn any conclusions from this," Dagdelen, a Bundestag member from the Left party, said in a statement.

"For me, this would mean no more arms exports," she continued. "This would mean that in the face of Turkish President [Recep] Erdogan’s war on Turkish Kurds with its over 500,000 refugees and hundreds of killed civilians, in the face of attacks on Kurdish enclaves in Syria by terror groups armed by Erdogan and on Armenian villages, like Syria’s Kesab, attacked by Islamism militias coming across from Turkey, we should end the brotherhood-in-arms with the Erdogan regime."

Turkey has been criticized for its bombardments of Kurdish militias in nearby Syria, which have been fighting against the Daesh terror group. Ankara accuses Syria’s People's Protection Units (YPG) of links to the domestic PKK separatist movement, labelled a terrorist group in Turkey.