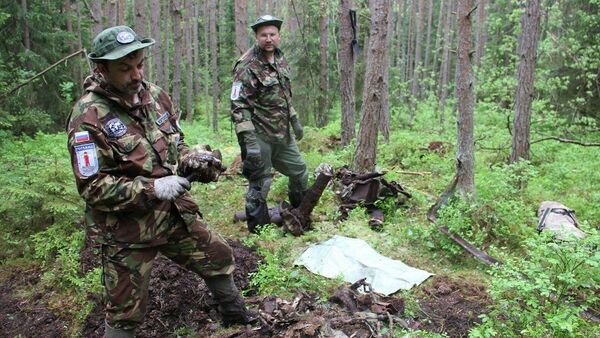 © Sputnik / Radik Amirov
/
Go to the mediabank
Subscribe
International
India
Africa
The results of the first part of the Russia's Bolshoi Tyuters' RGS expedition in the Gulf of Finland have been tremendous, expedition head Artyom Khutorskoy told Sputnik on Wednesday.

BOLSHOI TYUTERS (Sputnik), Alexander Mosesov — The results of the first part of the Russian Geographical Society (RGS) expedition to Russia's Bolshoi Tyuters island in the Gulf of Finland have been tremendous, expedition head Artyom Khutorskoy told Sputnik on Wednesday.

Russia
Expedition Finds 150 WWII S-mines on Russia's Bolshoi Tyuters Island
The expedition is the fourth to be carried out by the RGS to several Gulf of Finland islands. Some 100 Russian servicemen and 20 units of military equipment have been taking part in the expedition alongside volunteers and Rossiya Segodnya International Information Agency journalists.

In the course of the geographical, ecological and historical expedition, supported by the Russian Defense Ministry, the team discovered hundreds of World War II-era German mines, which have been defused, as well as a wartime Soviet bomber plane and the remains of its crew and German cannon shells.

A special ship will be sent to the island to tow away the scrap metal for further utilization on the mainland once the first two-week expedition shift concludes, he added.

Bolshoi Tyuters is located in the Baltic Sea some 75 kilometers (46 miles) from the coast of Finland. Previously populated, the island became uninhabited as a result of World War II. It was occupied by German troops and remained mined since the war.