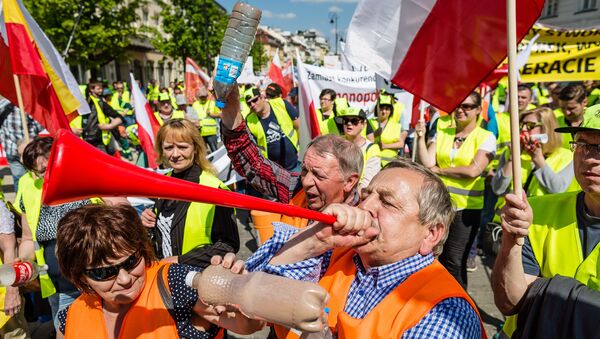 Polish lawmaker from the Civic Platform party Rafał Trzaskowski said that the European Commission is very delicate and shows a lot of patience in relations with Poland on the issue of the Constitutional Tribunal.

European Commission, Poland Fail to Progress on Constitution Court Crisis
MOSCOW (Sputnik) — The European Commission acts very "delicately" with Poland in a dispute around the Constitutional Tribunal, not interfering into domestic affairs, but rather playing a role of the guardian of the law, Polish lawmaker from the Civic Platform party Rafał Trzaskowski told Sputnik on Wednesday.

Earlier on Wednesday, first Vice-President of the European Commission Frans Timmermans said that the body was critical of the rule of law in Poland.

“The European Commission is very delicate and shows a lot of patience, it said quite clearly that it doesn't want to interfere into the Polish affairs, that this is a domestic problem and that it has to be resolved in Poland but obviously it has the right to check the situation when there are doubts,” Trzaskowski, a former Polish Secretary of State for European Affairs said.

These actions have paralyzed the country's Constitutional Tribunal, led to mass demonstrations by protesters defending the democracy and prompted the European Commission to open a multi-step procedure in January, checking whether Poland respects the rule of law.

Warsaw now has two weeks to present its proposals before any decisions are taken by Brussels.

"The government is not doing enough to come up with the valuable compromise on the issue… We just have some rumors and some leaks from the press [on proposals of the government], but we have to see the concrete proposals," Trzaskowski said.

Poland's New Gov't Undermines Free Press, Rule of Law – US Rights Group
If Poland does not comply with the EU requirements, it could face first-ever sanctions against any EU member under the new rule of law procedure.

"If the government does not change its policy and doesn't start to cooperate with its allies, then, yes, the consequences can be quite serious," the lawmaker said, though adding that stripping Poland of its voting rights in the European Union, as suggested by some member-states, would be difficult.

Another option being speculated by some EU states is to review the bloc's budget to take some development funds away from Poland as a punishment.