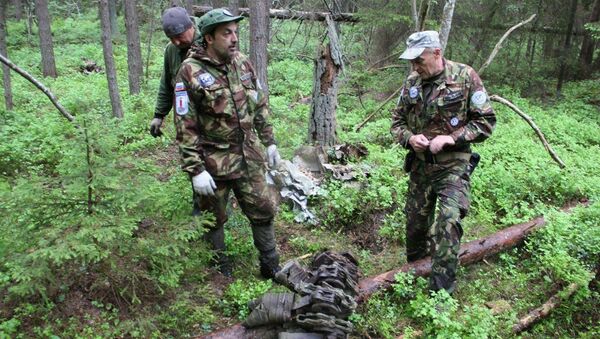 © Sputnik / Radik Amirov
/
Go to the mediabank
Subscribe
International
India
Africa
The head of the Russian Geographical Society (RGS) expedition to Russia’s Gogland and Bolshoi Tyuters islands in the Gulf of Finland, Artem Khutorskoy, thanked Rossiya Segondya international news agency journalists on Tuesday for their coverage of the expedition.

BOLSHOI TYUTERS (Sputnik), Alexander Mosesov — The expedition is the fourth to be carried out by the RGS to several Gulf of Finland islands, and is sponsored by the Russian Defense Ministry and the Leningrad Region administration. Some 100 Russian servicemen and 20 units of military equipment took part in the expedition alongside volunteers and Rossiya Segodnya International Information Agency journalists.

"I think that under the extreme conditions of an uninhabited island and with constant GSM signal and internet connection problems, journalists from Rossiya Segodnya managed to maintain constant correspondence with the mainland and covered each and every day of the expedition," Khutorskoy told Sputnik.

In the course of over a week, the expedition discovered hundreds of World War II-era German mines, which have been defused, as well as a wartime Soviet bomber plane and the remains of its crew and German cannon shells.

The work of Rossiya Segodnya journalists has enabled audiences to receive information about the expedition’s events immediately, Khutorskoy said.

An international Russian-German expedition also explored the islands, seeking to find the remains of fallen Soviet and German World War II soldiers, and exhume them before reburying on the mainland. The remains of at least 30 German soldiers and marines were found on Bolshoi Tyuters.