US Missile Shield in Europe Aimed at 'Containing Russia’s Influence' 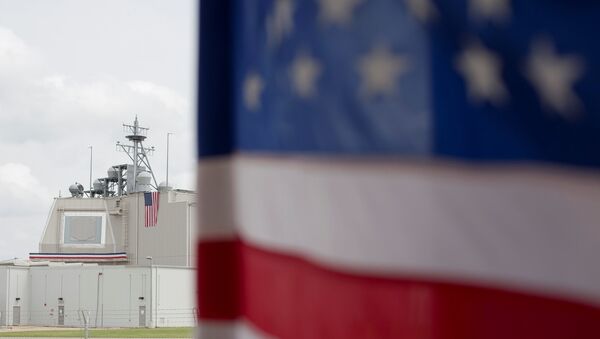 Earlier this month, the US Aegis Ashore missile defense system was officially inaugurated at the Deveselu military base in Romania, allegedly to protect the Eastern European country from a threat coming from the Middle East. A second Aegis Ashore system is expected to be deployed in 2018 in Poland.

US Inability to Cooperate Prolongs US-Russia Deadlock on INF Missile Treaty
Last week, during his visit to Greece, Russian President Vladimir Putin said that the deployment of the US missile shield components in Romania had a negative effect on relations between Russia and the West.  According to the Russian leader, the move undermines the "fundamentals of international security."

However, Washington has claimed that "the shield is directed against rogue states like Iran and intended to target Moscow’s missiles."

Lawrence said that the US missile shield in Europe is targeting Russia.

"Obviously this placement of missiles in Eastern Europe sends a message to Russia. And the message is: 'Look, you are not allowed to have a sphere of influence.' Indeed the Chinese aren’t allowed either. The only one who can really have a sphere of influence is the Americans and their proxies in Europe. This is essentially a Cold War theory of containment brought into the 21st century," he told RT.

The same view was expressed by Hans-Joachim Spanger, conflict researcher at the Hessian Foundation for Peace and Conflict Studies (HSFK), in Germany.

Shield or Sword? What is Known About New US Missile Defense Site in Romania
It is almost impossible that Tehran would actually attack European targets or US bases in Europe as it would ignite a military conflict and the biggest casualty would most likely be Iran itself, he told in an interview with Frankfurter Rundschau.

Davidson also commented on Putin’s remark that the US could deploy long-range missiles to Romania without Romania’s knowledge.

According to him, such a scenario is possible taking into account the fact that missiles could be interchangeable (like in the history of missiles in Turkey) and may be upgraded.

"I think that the Russian government has every reason to be concerned. The hypocrisy of all this is to be noted," the analyst noted.

Davidson added that Romania should be concerned after the US began deploying its missiles there.

Russia to Respond to US Missile Shield in Europe - Security Council
"What is the Russian response to be? They are going to have to move their own missiles into proximate areas to the eastern border, particularly Romania. […] Romania by soliciting this move has become a magnet, and Poland, too. You can’t have these kinds of arms in armory in your country and not be in the crosshairs.  It is just the logic of the situation," he pointed out.

Since 2014, NATO and the United States in particular, have been building up its military presence in Europe, particularly in eastern European countries bordering Russia, using Moscow's alleged interference in Ukraine's affairs as a pretext for the move.

Russia has repeatedly warned that NATO's military build-up in Europe is provocative and could result in regional and global destabilization.

000000
Popular comments
with the state of communications these days, the placement of bases is a waste. Russia's influence is seen and read about by a great deal of people.
michael
30 May 2016, 10:48 GMT
000000
Spheres of influence are the products of historical, cultural, and political interactions over centuries. It is insufferably arrogant, not to mention the height of historical ignorance, to amputate Russia from the rest of Europe. If this cold war line of thinking is followed to its conclusion, anyone in the EU who questions the EU-NATO Axis' provocations becomes, by default, a fifth column. This will pose further problems for European unity and drive matters to the edge.