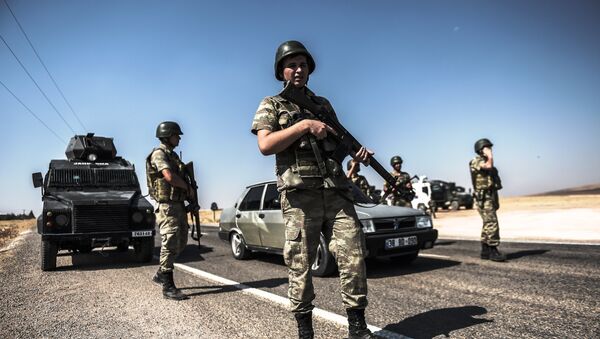 © AFP 2023 / Ozan Kose
Subscribe
International
India
Africa
Member of the Democratic Majlis of Syria and of the Syrian Kurdish Democratic Union Party (PDS), Ahmet Arac, spoke to Sputnik about how the Turkish Army is preparing to invade Syria.

Turkey Threatens to Launch 'Unilateral' Operations on Syrian Soil
Amid violent clashes between militants of Daesh and troops of the Free Syrian Army (FSA) in the town of Azaz in northern Aleppo district, reports are surfacing suggesting that the Turkish Army units have been seen located in the district of Azaz.

Earlier, the Democratic People's Movement stated that the Turkish military occupied the village of Hamam in Afrin region and called on the world community to condemn such acts.

One of the leaders of the Majlis of Democratic Syria, which is part of the Democratic Forces of Syria and the Syrian Kurdish Democratic Union Party, Ahmet Arac, told Sputnik that the Turkish Armed Forces are preparing an offensive in the Azaz area.

“Yesterday the Turkish Army carried out rocket attacks on the positions of Democratic Forces of Syria.”

“Two days ago, the Turkish military entered the village of Hamam in Afrin area. We are ready to repel any attack. Meanwhile, FSA units are suffering serious defeat in clashes with Daesh. They have already lost control of 12 villages. If Daesh comes to Azaz, ‘Democratic Syrian Forces’ will repel the jihadists, and not allow them to enter the city,” Arac stressed.