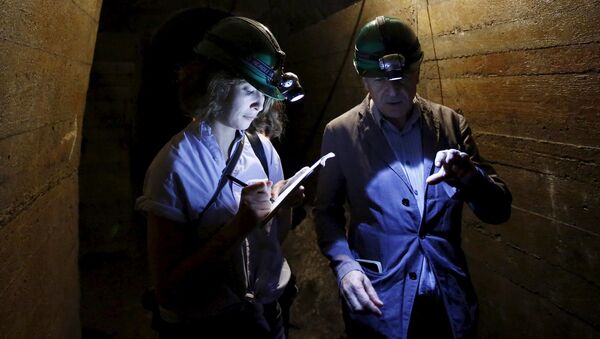 Excavations on the site where the mysterious "gold train" might be hidden will be started in Poland in the first half of June, Polska Times reported.

Mystery Behind Nazi Underground City: Hitler's Hiding or a Treasure Trove?
The excavations are expected to be carried out in the area of 65-km railway line from Wrocław to Wałbrzych, the newspaper wrote.

A group of amateur researchers had to get a special permission of various local companies and institutions to start ground works near the Polish railways, including energy firms, telecommunication operators and even a Belgian company that owns the nearby porcelain factory.

According to the newspaper, all necessary documents have been collected and sent to the Office for the Protection of Monuments in Wroclaw.
The permission for the ground works should be issued in the first half of June.

"We have 30 days from the moment of receipt of the application to review the case and make a decision. We are familiar with this case very well. So, it should not take us more than two weeks to review the documents and decide on the issue," representative of the Office, Maria Ptak told the newspaper.

The "gold train," also known as Hitler's train, mysteriously disappeared in the Polish region of Lower Silesia at the end of WWII and is said to have been carrying precious metals, art works and gold.

According to numerous speculations of scientists and treasure hunters, the train could be hidden in one of the tunnels, which could have collapsed during WWII bombings.

Media reports about the possible detection of the "gold train" appeared in Polish media in August 2015.