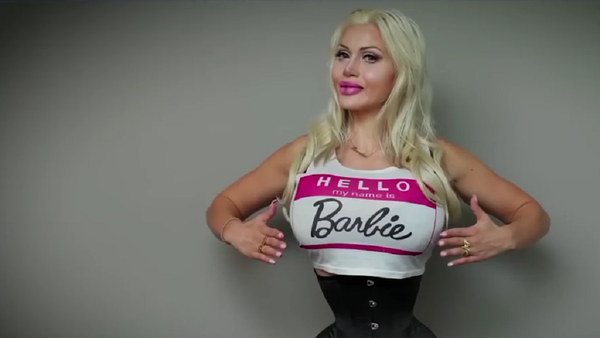 Pixee Fox, a native of the Swedish city of Gävle, sees herself as a work of art. Her obsession with mimicking the Disney character Jessica Rabbit is the reason why she quit her job as an electrician and underwent a series of extreme plastic surgeries, taking away six of her ribs.

Three nose surgeries, an eyebrow lift, three ribs modifications and four breast surgeries. These are just a few of the surgeries 26-year-old Pixee Fox endured to imitate her favorite cartoon figure. Now, 17 operations later, she is a proud living monument to plastic surgery and the world's first woman who had six of her ribs surgically removed. Nowadays, she resides in Los Angeles and is known worldwide for her peculiar doll looks and an unreal 16-inch waist.

Generally it takes grave medical reasons to remove ribs, like bone cancer or the need to remove internal organs. In Pixee Fox's case, the reasons were purely arbitrary. By own admission, Pixee Fox never studied medicine, buts considers herself well-read on the subject.

"After my first plastic surgery, I felt that this was what I wanted to do. This is what I want to dedicate my life to," Pixee Fox told Swedish Radio.

However, this extreme makeover has taken its toll on the girl's lifestyle, as she had to adjust herself and accept certain handicaps. Nevertheless, she prides herself on being the world's only person who willingly underwent such major rib surgery.

"I had to adapt my life around my surgeries and my living habits, so a 9-5 job, regardless of which kind, does not really suit me. The breasts are so large that it can be difficult to do some things," she said as quoted by the tabloid newspaper Expressen.

According to Pixee Fox, her example may nevertheless be seen as a positive inspiration, as she believes herself to be able to motivate people to be themselves even though they might be getting a lot of criticism.